Voting Cycle 3 is officially underway, and includes 9 proposals for voting. Hopefully this will relieve some pressure which delegates faced in the rather large Cycle 2. There are just a few notes that the Optimism Foundation would like to highlight going into this cycle:

Aside from the approval/non-approval delineation, proposals are listed in order of first appearance on this forum.

It seems a bit quick to start a new round straight after the last round ended. I would like to see at least a minimum of a 2 week break between rounds, currently it gives no breather to review or provide feedback to draft proposals, most delegates will be focusing on the active voting round proposals.

Another thing I would like to point out, there are some delegates that are purposely voting NO for their competitors or friends competitors, I think there needs to be a mandate in place to prevent this. I find it very disrespectful to the projects and highly unprofessional from these delegates! These individuals are working against the Optimism mission and in the previous round some had their own proposals, this behaviour actually swayed a couple of proposals from majority yes to majority no which was unfair on those proposal.

Also after reviewing 17 projects from the last round and reading the comments from delegates I have noticed some are basing their decisions off of presuming without asking the proposal team questions and some are actually commenting false statements on proposals. I have seen a couple of projects defunct the information in some comments, yet some delegates ignore it for what reason I have no clue!

There needs to be a committee in place to enforce rules to ensure delegates are kept to standards so we don’t see more of this behaviour. As also suggested on this proposal and some examples of the issues mentioned above [READY] [GF: Phase 1 Cycle 3 Proposal] Infinity Wallet - #70 by fewol, there are other proposals with the same issue.

The other issue is that there are far to many projects applying and its only going to grow, leading to even more of these issues, projects need to be short listed.

Words does not translate feeling properly so dont get me wrong but I believe we had ample amount of time to provide the feedback, some of the proposal are in draft mode from last 1 month and others are active from at least 2 week and that is enough time, at least in my opinion.

minimum of a 2 week break between rounds

I disagree with you on this, one thing that I really like and would like to see is iterative approach rather than start-stop approach. Pausing has other drawback too.

Another thing I would like to point out, there are some delegates that are purposely voting NO for their competitors or friends competitors

have seen a couple of projects defunct the information in some comments, yet some delegates ignore it for what reason I have no clue!

This is strong feedback and needs to be addressed, I would suggest you to collect your evidence to support your statement and reach out to Bobby or Vonnie via DM on discord. Also, if you have any suggestion for me, I would appreciate that too, my dm is open and my discord name is public.

My fren, if this is has to work, OP vision of governance with its two pillar(token house and citizen house) in a truly decentralized way, we dont need rule, you are the rule.

Committee after committee will not work, can you say with 100% confidence that the committee will be true to its vision. We can work this out with active participation and positive criticism. Reach out to the team, by helping them you are helping us all.

This is strong feedback indeed; I find it encouraging you are open to it though, and I am more than happy to provide the feedback reinforcing the accuracy of this/what has been stated here. 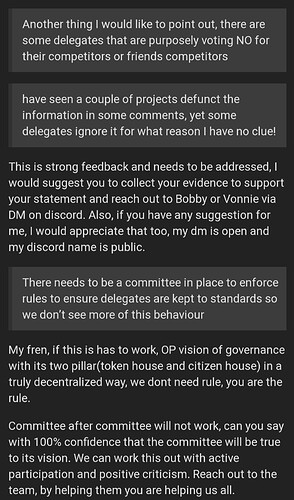 The reason they are back to back is to distribute the 36m tokens set aside for kicking off the ecosystem.

Final result for this phase.

I have voted for this round:

A: Superfluid: For
B: Kromatika: For
C: Hundred Finance: For
D: Biconomy: For
E: Dope Wars: Against
F: Infinity Wallet: For
G: Dexguru: Against
H: Overnight: Against
I: Saddle Finance: Against (previously voted Abstain)

General comment: While I’ve given many proposals the benefit of doubt in these early cycles, as we mature as a Collective, I’d like to see Gov Fund proposals make a clear case for why they’ll lead to user adoption on Optimism.

A: Superfluid: For – Superfluid is an incredibly strong team and I both like their proposal in terms of benefit to OP and excited to see them investing in bringing more of their existing ecosystem over as well. N-for-1 deal.

B: Kromatika: Against – The influencer marketing campaign is interesting but its allocation is far too high in my opinion. I see Phase 1 funding being better allocated to fund R&D and usage from L1/L2s to Optimism vs being used for a specific project’s marketing budget.

D: Biconomy: For – Great team and product which matters a lot. Proposal is relatively straight forward and great to see it be so builder focused.

E: Dope Wars: Against – Simply put the amount of requested tokens is too high for the lack of available clarity in the proposal for outcomes, timelines, and performance. I don’t see a requirement for this proposal to require so much upfront funding to be successful.

F: Infinity Wallet: Against – Wallets are better when built together. I’m a big fan of the model that Tally has taken towards a community-built wallet and a closed-source wallet seems antithetical to that model. I understand their reasons for doing so (and I have also created companies with closed-source software) but there are additional options for funding these types of projects beyond public governance.

G: Dexguru: Against – Not certain that the allocation does enough to drive users to Optimism. In general, the thread seems filled with low-quality support statements (maybe bots?) and a decent bit of drama. We can probably wait for things to shake out with the DAO before moving forward.

H: Overnight: Against – Reconsidering when the project is deployed on the OP chain.

I: Saddle Finance: Against – This proposal burns too fast and too bright, a large requested amount for a short-term distribution does not provide incentives beyond 3 months. It could work, but I’d rather see something with a longer timeline, seems to me this will just get farmed and moved.

Would love to hear your input on this.

This is not a proposal or even an idea for something. I want to hear your opinion on project(s) using token allocated to their project to boost their delegate voting power. In GF Phase 0, top three project got 21M OP(9 + 9 + 3) token and if they choose to delegate those token to themselves, it will lead to centralization in DAO which will hurt us all and might cause bias in DAO which is even bigger problem. Maximum number of voting we have seen so far was in GF Phase 0 when we saw 20M votes. …

I would like to see at least a minimum of a 2 week break between rounds, currently it gives no breather to review or provide feedback to draft proposals, most delegates will be focusing on the active voting round proposals.

I voted in this round:

I want to vote, too.

I voted in this round

I was wondering where is best to ask a question related to making a proposal? Is it okay to ask here?

here you go Governance Fund Phase 1: How to Create a Proposal

you can also ask your query here.

Flipside Crypto has voted as follows for Voting Cycle #3:

Please feel free to reach out for our reasoning or any concerns.

I have been looking to make a proposal the last week for my project, however I have some concerns. I noticed that voters abstain or put no to infrastructure projects because they cant validate the metrics, as an infrastructure project my self I am worried that by applying I am just going to be wasting weeks of my time to get an abstain or no and basically be pre-determined on the decision of my proposal.

I done some DD and it looks like voters in majority are only interested in supporting protocols and not infrastructure projects from when looking at another infrastructure project to get ideas on how to apply and what metrics to provide for my own proposal. Its like if a well known infrastructure project like this [READY] [GF: Phase 1 Cycle 3 Proposal] Infinity Wallet is getting no or abstain due to not been able to validate metrics even when its all over the place on most dapps and has traction, then how does any of us little projects have a chance?

(again, I understand why this is the case that it can’t be verified) and I will be abstaining for the same reasons as I provided in the last cycle.

The metrics are good but we can’t check them 100% as there is no data in the chain.

In the previous cycle we voted yes, but we had a change of mind as we share a similar concern about open-source and a lack of metrics to support the proposal.

I would love to know if anyone or even @linda @Bobbay_StableNode could tell me if there is any point applying because how can I validate if I make a proposal and provide metrics, it seems impossible for infrastructure projects like me and others

I would suggest make the proposal and ask for feedback on discord and/or here, each proposal is different and its difficult to comment without reading it first.