The Synthetix Ambassadors will soon receive a delegation of 2m OP tokens (Optimism governance power) from the SNX Treasury Council. We would like to ensure that there is advanced notice of this delegation because of anticipated community feedback.

It is important to note that there is a blog post detailing all of this, but I’ll quickly summarize the reasons for doing this in this thread by taking some pts from the blog post

If you look at the initial OP distribution that the SNX Ambassadors at the time (Matt, Mojo, Millie) wrote, it makes clear that there was intent (at the time) for this Optimism to be delegated to the Ambassadors.

This delegation was something Synthetix Ambassadors had initially pushed for under its internal proposal and was approved by the Spartan Council at Synthetix. Furthermore, these tokens were directed to be held by the Synthetix Treasury council, as they were deemed the best fit to handle distributions for incentives and so on.

Members of the Optimism community have stated that phase 0 delegations are only acceptable if it is adequately disclosed, and this disclosure was given. While it wasn’t correctly carried over to the Optimism forums, this was because of the lack of contentiousness surrounding this topic at the time because Synthetix’s phase 0 proposal came long before any drama in OP governance (proposal was posted in May)

The most notable example is when Overtime Markets requested OP tokens to incentivize users and compete with centralized competitors. They received a NO recommendation for their proposal from Optimism DeFi Committee C. For context, when a committee typically issues a recommendation there has been a 100% chance of losing their upcoming Optimism vote.

We’ve also rallied support in conversations in the Thales Discord, Optimism Forums, on twitter, and are also using our current voting power to support Overtime. As of right now, this support has helped put Overtime on the path of being the first proposal to overcome a NO recommendation.

The Synthetix Ambassadors can’t rely on this sort of outpouring of support each and every-time. Which is why it is essential for this delegation of Optimism to occur, as it will ensure that the Synthetix Ecosystem is properly supported.

One of the major situations is when the Synthetix Ambassadors lost their vote to be selected as an official committee in Optimism governance by far less than the 1.5m votes that were inaccessible for voting due to this issue.

Support for the future of Optimism Governance

As Synthetix ambassadors we feel that we are well equipped to contribute to the improvement and maintenance of Optimism via governance, and represent the Synthetix ecosystem in the Optimism ecosystem as well. We are not going away, and we want to see Optimism flourish for many years to come

Edit: It was only mentioned on SNX forum, not in the Op forum - which makes this a diff case.

Overall, we expect the Op ecosystem will continue to benefit from closely collaborating with the SNX ecosystem. We hope that other, similarly aligned projects also a) accumulate Op tokens on the free market and b) join this governance for a flourishing Op ecosystem future. It will be important to find a good middle ground between self-interests of stakeholder groups & general, long-term, sustainable Op ecosystem growth initiatives.

The last point might be especially important for SNX ambassadors & the Op team to consider as the SNX ecosystem in aggregation will have a lot of voting power (-> responsibility) in the Op ecosystem and we don’t see many teams/communities as professional, aligned & outspoken as Synthetix.

Thank you for the summary. Can you please point to where it was outlined that you intended to use a portion of the grant that was received for self delegation?

Yup. Just going to quote from the blog post written from SNX Ambassadors.

Blog post to look at it - Synthetix Ambassadors Optimism Governance Delegation — SNX Ambassador News - I’m just on mobile so gonna post a pic of it below. 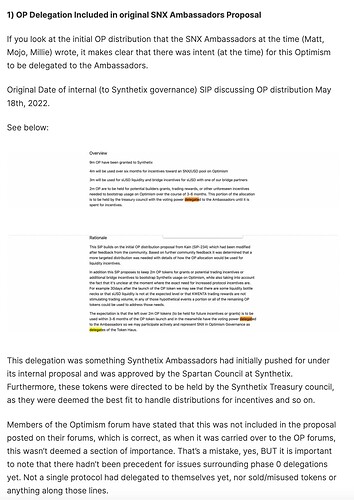 Ah ok so the self delegation component wasn’t included in the proposal that was voted on?

Members of the Optimism community have stated that phase 0 delegations are only acceptable if it is adequately disclosed, and this disclosure was given. While it wasn’t correctly carried over to the Optimism forums, this was because of the lack of contentiousness surrounding this topic at the time because Synthetix’s phase 0 proposal came long before any drama in OP governance (proposal was posted in May)

Well, yes and no.

Yes, because it was included in the SIP on the Synthetix side, which went through governance.

No because it wasn’t carried over to the forum properly, but it’s important to note that this proposal was carried over during a time of lack of contentiousness over details like this. There was no precedent for this at the time, and the vote for Synthetix (and all other Phase 0 proposals) was done in a batch - Snapshot

With this in mind, we believe this is enough to show that there was intent for it to be carried over.

I’m not the delegation police or anything, but personally I would like to see self delegation specified in a proposal and voted in with that component being made clear to everyone. But self delegation is a bit murky at the moment so I understand where you’re coming from.

I think, if their main wallet is not accessible and they are not able to vote with that, doing a self-delegation equal to amount of OP delegated should be a logical thing to do. Synthetix has a huge ecosystem and they mush have their voice in gov.

But self-delegation was not mentioned in the proposal so their internal document does not hold value. Doing the self delegation until issue is resolved with snapshot should be fine.

Is that what they are proposing? Just until the wallet issue is resolved? I’m not clear.

@MattL Will Synthetix also support other protocols who include self-delegation in their proposals to increase representation? I know many on committees have been opposed in the past.

I have been following this self-delegation question and it is a super interesting one. I think that there seems to be broad agreement that protocols, especially key ecosystem protocols, should have an active voice in governance. They key questions seem to be 1) Should Optimism be subsidizing this involvement through a grant program designed for ecosystem growth vs. buying their way in and showing that governance has monetary value, 2) How do we protect against overly self-interested behavior, 3) How do we ensure actual governance involvement vs. only focusing on voting for a narrow, specific purpose, and 4) What is an appropriate amount of self-delegation and should the tokens eventually be used?

This is a tough issue. My thought is that we are using 1 grant program to solve 2 different problems. If there is agreement that protocols need a voice, then it seems like we should have grants/approvals specifically for self-delegation and encourage protocols to apply for OP specifically for that purpose. For example, if we agree that say 50% of vote (just an example) should be protocol voice then it is pretty easy to assign a grant bucket based on current votes. Some benefits: Protocols could then justify how much they want based on importance/TVL. We could require that they appoint a delegate who should be actively involved based on certain KPIs. Require that they abstain from votes on their own proposals and attach other requirements that make people feel the process is fair. It also allows protocols to choose to participate in governance AND apply for needed funds rather than trying to incorporate both elements into a single proposal. Finally it incentivizes governance participation and as more OP gets delegated will require folks to get more skin in the game to maintain their vote share.

All this to say, I think 2M OP (10ish % of current votes?) seems about okay for an incredibly important protocol on Optimism. Obviously, it seems like they are participating broadly, but perhaps clearly outlining how Synthetix ambassadors are participating/will participate in governance going forward would outline the value of this specific delegation.

@katie re-reading your post, this is kind of what you were saying too?

@katie re-reading your post, this is kind of what you were saying too?

The issue with Synthetix is a little different because they have tokens that have been delegated to them that they are unable to use. My understanding is that they are using self delegation as a temporary solution to not being able to vote with their current delegated tokens.

@MattL can you clarify if the tokens they have in the multisig (unable to vote) are community delegations or was it a grant of optimism?

Replying to this from email so pardon me if it looks weird.

The inaccessible tokens in our original multisig is from community delegations. Our new multisig has already received 2M from the Synthetix Treasury Council.

That’s not what is being proposed, we’re going to be leaving the self delegation until the Synthetix TC uses that 2m for incentives. That’s what was laid out in the SIP, and was meant to be carried over to the forums.

Regarding self delegation - I don’t personally have an issue with self delegations being used by protocols, but I do think it’s one of those case by case items that has to be worked through as a part of the overall review of proposals. It’s a tough issue, but I think protocols have a say in overall OP governance is better for all of OP.

Hey MattL, this is a bit concerning.
Currently the 2M are delegated and SNX Ambassadors controls both addresses. This means that potentially have 3.4M voting power as per the dune dashboard and are by far one of the biggest delegate.

Are you guys going to be using BOTH, supposing the issues relating to the msig are solved?

We think that due to this delegation being included in internal Synthetix governance, and Synthetix’s large impact on the overall ecosystem it shouldn’t be thought of as concerning. We have a great deal of projects in our ecosystem, and many outside of it who we work with all the time to help them grow or bring them to Optimism.

Synthetix cares deeply about Optimism and we think we’re in a position to play a great role in governance.

Lol; it is true what you say?

Agree. I too find this very concerning.

For the record, I don’t doubt the importance of Synthetix to the overall defi landscape, I just think an eventual voting power of 3.4m tokens overstates their importance and is contrary to a vision of decentralisation.

If anyone thinks I’m being too cynical, just ask yourselves: When they cast their 3.4m votes which stakeholder will rank higher in their voting decision, the Synthetix organisation or the Optimism Collective? (Hint: these two should not be one in the same).