No usage metrics yet: App is still to be deployed on OP.
Usage metrics will include TVL, transaction volume, daily-active users, and more.

The 0xHabitat team and community is a collection of governance and scaling nerds, united in a vision of affordable on-chain governance for decentralised communities and collectives across the Ethereum ecosystem. We value open-source collaboration, decentralisation, and security.

Habitat is operating as an holocratic organization, growing our community by using several coordination tools, which include 0xhabitat’s token governance, democratic signaling, and multisigs. Optimism enables balanced scaling for better user adoption, and 0xHabitat wants to utilize this scalability to provide optimal governance and smart contract tools that are not currently suited for Mainnet.

DAOs on Ethereum struggle with low participation rates, plutocracy, and stop-gap tooling. The main reasons are high gas costs on Mainnet - not only resulting in less voting turnout but also in missing features for incentives or new solutions. Rollups bring a new and extended design space for DAOs and communities. Scaling voting, delegation, treasury management, and many more social features and tools.

Habitat is building with EIP-2535. This standard allows organisations to use already existing contracts (facets) on Ethereum and easily develop new ones. Making it easy to share and iterate working DAO tools. With the HBT token DAOs can upvote highly demanded solutions (contracts) that are then implemented and used by everyone.

Our goal is to provide developers, decentralized organisations and teams a place on Optimism to grow their community in their tailored way. The EIP-2535 (Multi-Facet Proxy / Diamond Standard) allows to host a set of features within our unified framework, Gemcutter.

The Habitat project is part of a broader mission that gives normal people non-technical control over their underlying contract, which is achieved through EIP-2535’s innate modularity. This can be realized through contract upgrade preset packages stored on-chain and contract node package libraries stored off-chain. The shared javascript library between Gemcutter and an onchain app can allow for a git-like, crowdsourced development infrastructure that leads to more developer and DAO-to-DAO collaboration.

The goals of our mission will be met by:

The Habitat governance modules will be natively integrated as part of this larger ecosystem of builders. We are in active collaboration with useDApp and Sourcify, and have received considerable support from the creator of EIP-2535, Nick Mudge. We also have a designated channel for our Gemcutter framework on the Official EIP-2535 Discord.

Once the Habitat Application is ready, users can deploy their Diamond and use Gemcutter to manage it, which will provide most of the needed tools to operate a DAO on Layer-2. In cooperation with the communities launching on Habitat, our project will look to extend the Habitat DAO toolset library. Using the native Habitat token, new features can be voted in, and will be verified to ensure the security of each DAO that implements the feature (Token curated registry).

With this proposal we ask the Optimism Community to support the growth of the Habitat Application to make DAO tooling more accessible for Ethereum users, Developers, DAO-members, and in general; Builders of a better World.

Unlock of OP is based upon the following Milestones:

By providing a secure, modular platform that optimally rewards communities, users, and developers, liquidty and usage can grow cyclically. OP tokens will be used to incentivize the activity of DAOs within the Habitat app, natively on Optimism. Through a gradual token distribution (drip), Habitat will provide users with educational experiences of DAO processes, giving both decentralized governance beginners and experts a home on Optimism. Developers that are aiming to extend the functionalities of the Habitat app, the Gemcutter framework, and/or compatible contract modules can also receive OP Tokens from 0xhabitat in a grant-style process. Doing so will allow the platform to scale, serving larger communities with more capital.

Using our underlying framework, Habitat hopes to create a cyclical economy of DAO-to-DAO collaboration that rewards developers for their contributions. Developers may gain the ability to monetize the usage of their contract modules and Habitat could help enable this if the community decides it is in our interest. In addition, we aim to gain loyal users of our community governance modules due to their ease of use. The modular approach would allow customizations and a variety of management modules specifically tailored for secure upgradeability and inter-DAO coordination. Moreover, due to the lacking upgradeability of other DAO management platforms, coupled with the fact that migrating DAO treasuries require considerable coordinative effort, we believe that communities would benefit from an upgradable Diamond proxy that they control. That way, if their contract needs an additional feature, they can implement it within their own development environment, or they can use Gemcutter, thereby contributing to the entire ecosystem through open re-usability of the new module.

Distribution and rate would be based on initial traction and interest into the Habitat product offering. Targeting 9 to 12 months, we would adjust distribution to properly reflect community growth after the first few months.

This will be subject to Habitat community vote after launching the application. Habitat would be looking to allocate 5% of total token supply matching co-incentives to the OP Token.

0xHabitat is open to run Onchain Governance Funding for Optimism in Q4. The Optimism Collective is welcomed to use 0xHabitat for community operations and spearheading scalable on-chain governance within the Ethereum Ecosystem. 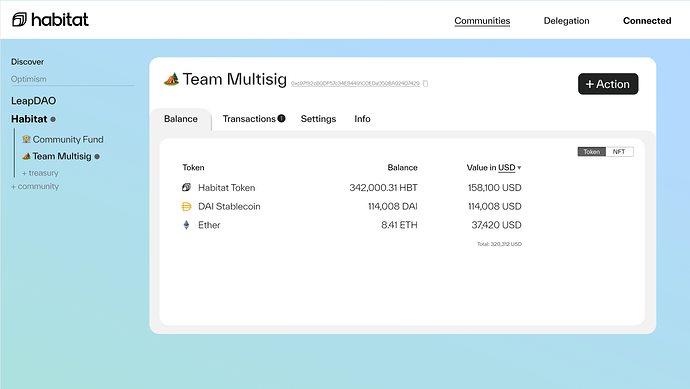 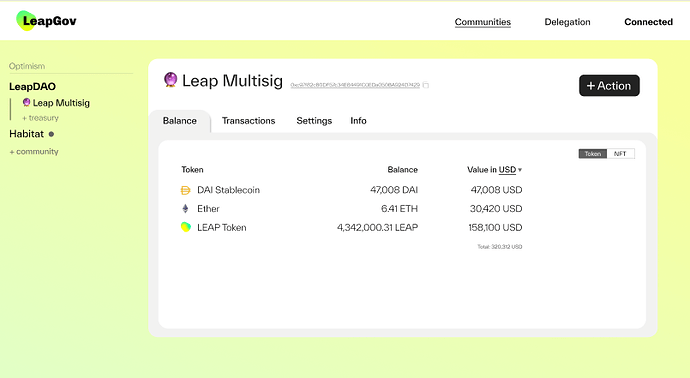 Can you provide additional details on your roadmap and when you would expect to be allocating the OP tokens if your proposal is approved? What stage of development and use would you expect to be in at that time?

Are you creating a public good that would be eligible for retroactive public goods funding?

Can you provide additional details on your roadmap and when you would expect to be allocating the OP tokens if your proposal is approved? What stage of development and use would you expect to be in at that time?

As soon as the testnet app is ready, we could do testing incentives, so we get feedback and learn what can be improved. (July - August) After that, and once internal governance system is running, the OP tokens could be allocated to a dedicated treasury within the DAO. Same goes for the developer grants to build new modules. (August-September)

Creating a Community, creating attached treasuries, creating budgets and subDAOs within these could be incentivized. Reaching a certain TVL within the communities and treasuries is important to support the idea. Frequent and organic usage can be measured with data. Incentives could be allocated on a weekly basis to avoid “tourists”.

Are you creating a public good that would be eligible for retroactive public goods funding?

We plan to decentralize all aspects of the application and look to make it available for as many people as possible. I don´t know if that qualifies for RAPGF.

Reason: Matching incentives are not clear, project is not Live on OP and 400K token is big amount for a project that is yet to launch on the OP chain.

Distribution is somewhat good,I like that 90% is distributed between dev and integration.

Suggestion: Launch the project, provide more usage statics and would consider this in next phase.

Now, I am requesting your feedback on these of my ideas. Feedback is two-way approach, you help us and we help you.

There were 20+ projects in Phase 0, some of them has a good plan to distribute the token while other does not. Here is an excellent summary by @MinimalGravitas . Phase 0 officially concluded yesterday and soon OP will distribute 36M token between Phase 0 projects. Announcement With this proposal, I want to share my idea and seeking your feedback on whether to allow Phase 0 projects to submit another funding proposal in phase 1 or not . In my opinion, as long as previous funds are not exhauste…

That is a good question, and this is what I was thinking. For integration fund, one example will be Infinity Wallet proposal where 80% is going for dev and integration - Let’s say project A is giving some incentive to project B for their integration, in this case I think it would not be a problem to share their address as both are public application. For marketing and content creation (for example 80% Marketing proposal of Kromatika Proposal): - This depends on content creator(s), if they are …

This proposal fits into Gov Fund Phase 1 but there are too many open questions: Voting No

The 0xHabitat project is interesting for all governance interested parties in crypto (we did follow you early on). Some parts in your proposal look good but many areas are also a bit unclear and questions remain. Based on our understanding and the proposal given, we do not see the big picture how your project and proposal fits into Optimism and how it can help the Op ecosystem grow. In this current funding round, your ask is a bit high considering the open questions as well as the unclear proposed usage of 45% Op tokens.

Thanks for the proposal. I’m definitely a fan of better coordination tools in general. However, the amount requested is high especially given that the app is not deployed yet so it’s not clear to me that it’s the best use of funds for furthering the Optimism ecosystem now. I am looking forward to seeing the traction/usage later down the road though for future consideration.

I like the product you’re building, and is aligned with Optimism’s vision for better governance that evolves beyond simple plutocracy - such tooling can have a high impact. I’m voting Yes, though as others have pointed out this is definitely one of the more speculative proposals.

This is a great and necessary product for the Optimism ecosystem. However, the product isn’t launched yet and the amount of OP requested is far too high for an untested product. 0xHabitat will hopefully have a place in the optimism ecosystem but we are going to vote no until we see an actual product and maybe a reduced OP amount.

I like what you are building here. This may prove to be quite a useful tool in the future.

But I will vote a reluctant NO.

I would highly encourage you to continue and apply later with a smaller amount.