We have already helped execute close to 23,000 txns on Optimism; for example Connext uses Gelato’s Relay SDK to enable their users to automatically claim their bridged tokens on Optimism using meta-transactions executed by Gelato. We’re excited to present this proposal for how we can help even more projects outsource their web3 devOps and accelerate their product development on Optimism.

We can support the growth of the chain by:

How will the tokens be distributed?

Subsidising infrastructure costs for web3 developers is the cleanest and least subjective way Gelato can help projects go live and bootstrap on new networks such as Optimism. We will be subsidising usage of Gelato’s infrastructure network by having the network charge 0% fees on transactions that are automated by Gelato.

The node operators that comprise the Gelato Network still need to be incentivized to run their infrastructure and execute these transactions, thus 250k OP incentives will be used to enable these operators to cover their fixed costs and generate a small profit, so that we make sure the decentralized network of Executor Operators are still sufficiently incentivised to keep operating. Note: Only Executors operating on Optimism will receive those subsidies.

Builders are the lifeblood of any ecosystem. Gelato provides builders with bounties for developing interesting automation use cases on top of DeFi, NFT and gaming protocols. We will use 50k of the OP incentives to help more of these developers figure out how to automate certain functionalities that they are looking to build for their dApps on Optimism. Example ideas would be e.g. building Resolver smart contracts which help automate Synthetix reward claimings on Optimism using Gelato. We will post certain ideas which anyone can start implementing as well as being open for anyone to propose interesting use cases for Optimism themselves!

Gelato Ops makes it super-easy for users to set up the automation tasks in an entirely self-service and permissionless manner. We are seeing some fantastic levels in the growth of usage across our networks: 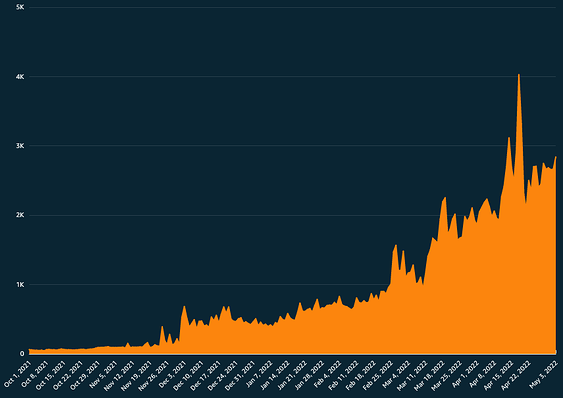 Gelato is such an excellent addition to Optimism in terms of infrastructure and having a permissionless Keeper platform that anyone can access. Well done @hilmarx.

I very much support gelato network and I would be glad to use it also on OP!

Gelato such great project for optimism grown support this proposal