Functioning as a credibly neutral public good, 0x Protocol is the open-source, global backbone for decentralized exchange. Developers use 0x to add flexible, multichain exchange functionality into their applications and to create new markets for tokenized assets, including DeFi tokens and NFTs. 0x offers secure, audited smart contracts, a professional-grade API, and a comprehensive set of developer tools and documentation.

The 0x mission is to create a tokenized world where all value can flow freely regardless of the blockchain it lives on. With integrations across all of the top wallets and apps, including MetaMask, Coinbase Wallet and Coinbase NFT, Polygon Wallet, Brave, Matcha, dYdX, Zapper, Zerion, and Shapeshift, 0x is fast becoming the trusted standard for all decentralized exchange.

To date, 0x has enabled over $160B in tokenized value to flow across 44M+ trades, and there are 4M+ users across all wallets and app integrations. 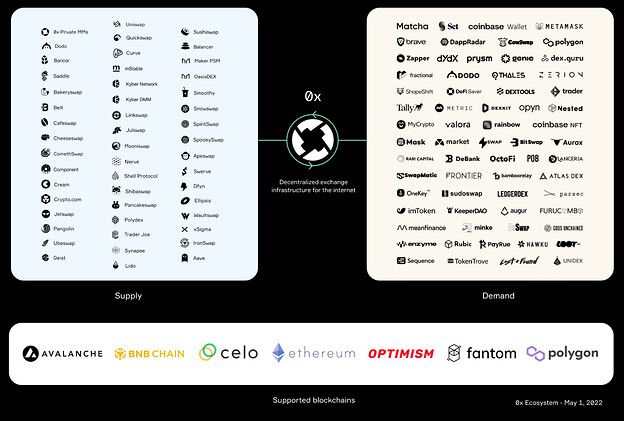 While Ethereum is the platform on which most tokenized value has emerged, transactions have become prohibitively expensive, pricing out potential users and use cases. Optimism, an EVM compatible optimistic rollup chain, aims to increase the throughput of the Ethereum network and reduce gas costs. By improving scalability, optimistic rollups make it cheaper and easier for users to transact on top of Ethereum. Optimism represents an exciting opportunity to expand the reach of 0x Protocol and that of our 0x API partners to a large and growing global user base.

Since deploying to Optimism, 0xAPI has enabled $27M in trading volume.

We believe that exposing the broadest set of users to smart contracts, self-custody wallets, and DEX markets is critical to driving multichain adoption, and as core exchange infrastructure for the internet, we’re keen to help our integrators onboard the next wave of crypto users to their products.

This philosophy informs our strategy to allocate 100% of the Phase 0 distribution to the 0x Grants program, which will distribute it to projects seeking to combine 0x’s deep and easily accessed liquidity with Optimism’s fast and flexible architecture. We believe this approach aligns well with the vision and goals of the Optimism Collective by helping to drive rapid and sustained growth of a decentralized ecosystem.

To accelerate distribution, 0x Grants will award grants <$10k, similar to our current grant initiative supporting Polygon. If larger grants are requested, an onchain, community vote will be held. Over the past year, the 0x community has awarded more than $1.2M in builder-focused grants, with ~$300k awarded directly by 0x Grants. For this initiative, we intend to allocate at least 50% of the total distribution to NFT/gaming projects building on Optimism (grant application).

As an example of the benefits of this approach, using a joint allocation from 0x and Polygon, 0x Grants funded a ZRX/MATIC grant to Trader for an MVP, which was later followed by an onchain, binding vote, where the 0x community approved another, much larger grant to Trader. Among other things, it funded development of the NFT Swap SDK, which enables developers to quickly and easily build NFT swap functionality into their Ethereum (or EVM-compatible) applications, just by adding a UI. It is now being used by Coinbase NFT and other applications deploying natively or expanding to Optimism (example).

The value of the original grant is amplified by the value that the products developed provide to other builders using them to build their own products. We can easily see dozens of projects receiving ZRX/OP grants and using the SDK to jumpstart a vibrant NFT ecosystem on Optimism in the next few months.

In addition to grants for teams developing applications, we can also foresee some of the allocation being used to fund the R&D of tools that expand governance capabilities and reach, with the goal of reducing gas costs incurred with onchain proposal voting and enabling other use cases that may benefit from multichain presence and coordination.

As shown in our ecosystem graphic (above) that illustrates the 0x ecosystem, awarding joint ZRX/OP grants will serve as a force multiplier to accelerate Optimism ecosystem growth across many liquidity supply and demand use cases, in contrast to incentivizing usage of a single application or user base.

For NFTs in particular, the liquidity aggregation benefits associated with a shared orderbook – something that we believe is not currently available from any other protocol on Optimism – will significantly benefit Optimism users because listings won’t be siloed in closed platforms.

Optimism developers will find that building on 0x significantly reduces the effort required to deliver a seamless experience to their users, giving them more time to focus on their products. This opens the door for future improvements, extensions, and novel synergies between DeFi, NFTs, and other emerging asset categories on Optimism, all of which will grow usage and liquidity.

Shared skin-in-the-game, builder-first grants create exponential value, because they support sustainable ecosystem growth that scales at the network, developer and end-user levels. Incentives going to builders (in contrast to end users) tend to be minimally mercenary, as they contribute to attracting developers, maturing applications, and improving experiences, which converge to create more active, loyal users and a virtuous flywheel.

We will match the OP allocation 1:1 in ZRX, doubling the funds available to grow the 0x ecosystem on Optimism. Given that we don’t know what the value of OP will be, this commitment will be capped at $250k in ZRX.

EU financial regulator says cryptocurrency exchanges should have their licences revoked if they are found to be in serious breach of anti-money laundering rules. The MiCA (Markets in Crypto Assets Regulation) should properly incorporate AML/CFT (anti-money laundering and terrorist financing) issues into the prudential regulation of entities, according to a report on Wednesday from the European regulator that oversees banks, insurance companies and securities markets. (CoinDesk)

UPDATE: Total 0x API volume on Optimism has increased by 51% since our original post!

great product you can trust it,s there a long time

Just like with uniswap’s phase 0 proposal I will vote to reject this one too since it misses the deadline for phase 0 projects and am not 100% sure how much benefit it would bring to the OP ecosystem.

0x did not miss the deadline.

@haonan can confirm the deadline was extended to 27 May . That’s what was communicated to all applicants in the “Optimism Stimpack” telegram channel, which was setup for coordination