Rationale: The amount requested is too large for an early stage project. There is a slow distribution cycle, lacks incentive matching, and 450,000 of the amount requested (50%) is directed towards the project’s own liquidity. The ecosystem value proposition is not as clear for this request.

Next Steps: Our recommendations for this proposal would be to lower the amount requested, advise anything being used in 2023 to be requested at a later date, and the remove the 450,000 OP distribution that are used for the project’s own liquidity.

Rationale: We are aware of the debate in the comments, however, we are focusing on the merits of the proposal itself. The amount requested is reasonable, the funds ultimately go to Uniswap v3 LPs on Optimism which we support, and we believe the proposal would drive Optimism ecosystem growth.

Rationale: All of tokens are being used to bootstrap Tarot’s own token; the use of the tokens being distributed to the core team for operational costs is unclear in terms of breakdown of resources, and there is a long distribution period.

Next Steps: Our recommendation is to focus on Optimism pairs and add transparency around the use of funds for operational costs.

Rationale: This is a clear and well-thought-out plan for distribution. It is a reasonable request in size. We appreciate Kromatika taking previous feedback into consideration and revising their proposal. We are happy that the marketing allocation is going towards Optimism and would like to see a follow up on in the future.

Note: Linda Xie abstained from this committee decision since there is a potential conflict of interest with 0x / Matcha which Linda’s husband co-founded.

Voting recommendation: No with caveat to resubmit

Rationale: The team is well established and this proposal has great co-incentives. However, we would like to see this proposal broken up into 2 separate smaller requests, each with a 6 month timeline.

Next Steps: Once this proposal has been resubmitted into 2 separate, smaller requests, we would be happy to give a yes vote. We are requesting that the updated proposal get re-submitted back to DeFi Committee Group A.

Note: Flipside Crypto abstained from this committee decision since they have a position in Sushi and are involved in Sushi governance.

Would like to clarify a few items which appear to have been missed during review of Tarot’s proposal by Committee A:

Distribution Period:
The distribution period was extended in response to community feedback, as outlined in our Summary of Incorporated Feedback.

Use of OP Tokens:
Regarding the 10% portion of OP, the use of these tokens is quite clear. From our proposal, the complete breakdown is:

The OP will be paired with team-held TAROT and provided as initial liquidity on Optimism for a period of at least 12 months.

Focus on Optimism Pairs:
For the rest of the OP incentives (90%), the idea is to use them towards TAROT liquidity, and incentivize general borrowing/lending activity (for all Optimism pairs) within Tarot via TAROT incentives. The co-incentives allocation following the adoption of TIP-018 (which includes 3M TAROT) is flexible, and can be used to incentivize Tarot activity for any pair, not just those that are TAROT-based. One such use of this allocation is via Tarot’s own single-token TAROT farming rewards mechanism, which tracks and rewards borrowing activity in the protocol.

Currently, we’ve found bribing to be the most capital-efficient liquidity incentivization mechanism, but using OP incentives to drive liquidity for non-TAROT pairs (e.g. BTC-ETH or OP-ETH), while benefiting Tarot’s growth to some degree, would not be as effective as incentivizing Tarot activity directly.

This is because Tarot is different from other lending protocols, in that DEX rewards are directly correlated with and intimately tied to the activity in our isolated lending pools. This is evidenced by our DEX liquidtiy incentivization to date, which has resulted in ~$135K borrow activity in a single pool on Optimism.

By significantly increasing the available liquidity for TAROT on Optimism, Tarot will have the flexibility to offer a number of direct or targeted incentivization models on Optimism for lending pools. In practice, the increase of borrowing activity in Tarot’s lending pools creates a flywheel effect and, in response to higher pool APRs, lenders are incentivized to supply additional tokens, thus increasing TVL and liquidity across the ecosystem.

Liquidity incentivization for the TAROT-based pairs will encourage Tarot stakeholders to provide deep liquidity in the OP ecosystem. This distribution helps Tarot to continue to offer competitive yields, generated by supply and demand for loans in isolated lending pools, to users on Optimism, and will facilitate the creation and expansion of additional lending pools (e.g. USDC/TAROT) with attractive leveraged APRs.

Addendum:
Relative to other proposals, an immense amount of discussion has taken place in Tarot’s proposal thread since its introduction in July. None of the members of Committee A provided any feedback, nor asked any questions, prior to delivery of their recommendation, despite having the opportunity to do so in the preceding weeks and months that Tarot’s proposal has been available for review/discussion. I would have been, and continue to be, happy to address any items that the members of Committee A feel need clarification.

Use of OP Tokens:
Regarding the 10% portion of OP, the use of these tokens is quite clear. From our proposal, the complete breakdown is:

The OP will be paired with team-held TAROT and provided as initial liquidity on Optimism for a period of at least 12 months.

Thank you for your feedback. The initial proposal also stated “60,000 OP is allocated to the Tarot core team in support of Tarot’s growth and operations on Optimism.” Since the tokens go to the core team after the 12 months (or potentially extended period) of initial liquidity, we were recommending showing more transparency on the breakdown of operational costs. This was only 10% of the proposal so this was not the main reason for our voting outcome.

Regarding the remaining 90% distribution, I saw that you had addressed this topic from a couple other people who posted on the forum with concerns that the primary focus for the tokens would be on the incentivization of TAROT token liquidity, which a few of us on the committee independently felt this wasn’t the best use of OP funds. This topic had been addressed multiple times in the forum so I’m not quite sure if there were any additional questions we had in order to clarify this, but I’m only speaking for myself as one of the committee members.

Hi @linda - appreciate your walking us through your thinking. Here’s my take on this, hope it’s helpful.

Tarot, an incentivized leveraged yield protocol, is unlike many projects in that it can (and would) directly incentivize general use selectively with token emissions. Borrow and lend on the protocol, get TAROT in addition to your compounded yield.

Because of this, using OP to incentivize liquidity on TAROT is more or less tantamount to directly incentivizing borrowing and lending activity. More liquidity → more capacity to issue TAROT → more users of the protocol.

In this way, Tarot would have the flexibility to juice certain types of activity it wants to promote without having to redirect OP to farmers looking to dump it. Pairing TAROT with OP isn’t necessary but does offer a marginal liquidity backstop for OP.

Properly understood, I think this is very much in alignment with the type of usage/activity incentives approved in some of the other proposals like Kromatika’s. So I’m curious if this context changes the committee’s calculus?

In terms of process, I’ve now read back through the original forum discussion and don’t see much discussion that probes around this critical dynamic associated with TAROT token liquidity. The closest I can find is a post by @OPUser, which says this: 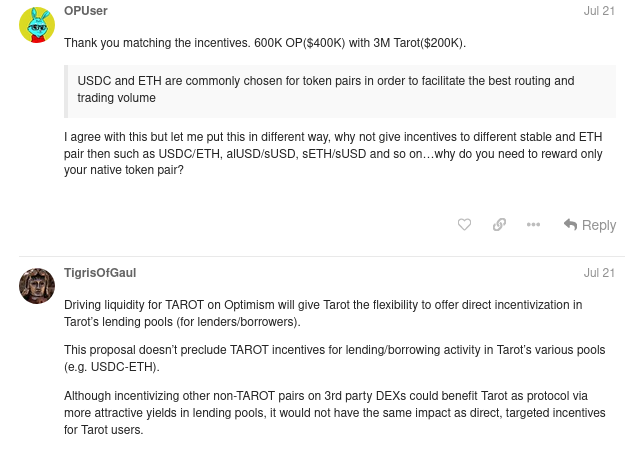 There’s also another from @OPenthusiast that largely mirrors the opinion of this committee but doesn’t substantiate their position.

In the same thread, @OPUser on a related topic says:

Apologies, this is above my knowledge and understanding but will wait for someone who has to comment on this.

I think ideally your committee would be that group with the additional knowledge or context.

In the future, I think it is critical that committee members follow up with protocols with clarifying questions, especially if rejection recommendations are going to be so pithy.

Although this isn’t formally in the job description, I believe this ought to be expected of delegates compensated for undertaking the extra due diligence. It is also critical that builders feel understood and supported by these DeFi committees — otherwise we risk a reputation that will drive them elsewhere (something we’ve seen a few express publicly already).

Thanks for your feedback.

We view the OP incentives program through the lens of efficient capital allocation, and structured our proposal to align the long-term success of Tarot on Optimism with that of the Optimism network.

This is why Tarot’s proposal is centered around sustained and deep liquidity. When it comes to long-term growth, the allocation of incentives towards mercenary liquidity is grossly sub-optimal vs. building deep liquidity for a project on Optimism. The former has proven time and time again to merely stat-pad TVL until the incentives run out, with the liquidity hopping from chain to chain to follow the incentives. The latter has a chance to sustain long-term growth and innovation by projects making a home on Optimism.

Currently, the direct incentivization of DEX liquidity is 30-50x more capital efficient than incentivizing borrow activity in Tarot. For example, $1 of OP bribes results in $2-3 of DEX rewards almost immediately, compared to $1 of OP borrow incentives resulting in ~$1 of borrow activity over one year. From the protocol’s point-of-view, it makes no sense to bribe non-TAROT pairs on DEXs, as the impact of bribing other pairs does not flow to Tarot directly.

Our proposal also includes significant co-incentives (3M TAROT, plus any matched by other projects) to directly incentivize our protocol activity, which we feel provides a good balance with the allocation of OP incentives.

Ultimately, what is the purpose of the OP incentives program?

My understanding is that the intent of the OP incentives program is not to increase trading fees for the highest volume OP pairs on Velodrome and UniV3. Rather, it is to meaningfully increase transactions and sequencer revenue on the network, attract users from other chains, and attract builders to develop on Optimism. Tarot’s continued success on Optimism accomplishes all of these things. In fact, even without incentives, Tarot already represents a significant amount of network activity on Optimism (on the order of ~10K transactions per week).

As a project that is excited to be part of the Optimism ecosystem, we hope that creating an environment that encourages long-term growth and efficient capital allocation is an objective of the Governance Fund.