As we are about to ponder around way to improve engagement in our governance, I would like to restart the conversation on solving voter’s apathy.

I brought this topic on many occasion in the past [1, 2], this(Solving voter apathy) complete thread by Polynya is dedicated to this topic(highly recommend reading that thread if you havent already). But so far we didn’t see any progress to include more community member is Optimism Governance.

Apart from Delegates, we have seen few protocol sharing the same thought and working towards overcoming this challenge.
Continuing the discussion from Introducing Otterspace, a Soulbound Badge solution for DAOs:

Show me the incentive and I’ll show you the outcome". Charlie Munger, Other DAO are also doing their brainstorming on this topic. Promote DAO by incentivising voting - Vaults - yearn.finance

Looking forward to your feedback and suggestion.

This is an important topic, and it’s one that we need to address urgently.
There might be legal implications around token incentives which will need some figuring out, but another option is to gamify governance participation by creating quests, badges, etc., to keep the community engaged.

I think this is a pretty urgent matter, the situation has gotten worse since the last time we discussed it. Looking at the participation in Cycle 8, it’s barely representative of the Token House - there’ll be some proposals that’ll pass with <2% tokens voting.

The short-term solution to drive interest would be Airdrop #2 as mentioned, though of course I don’t know how that can be executed - up to OF I suppose.

Could be wrong here, but airdrops for delegation or voting seem like transparently the wrong sort of incentives to get the behavior we’d want to see.

Why? The majority of users will do the exact minimum to secure the bag.

What do we get?

For delegation: more day-one delegation without regard for actual affinity or alignment and zero follow-up. We end up right back where we were, with the massive distortions in distribution. 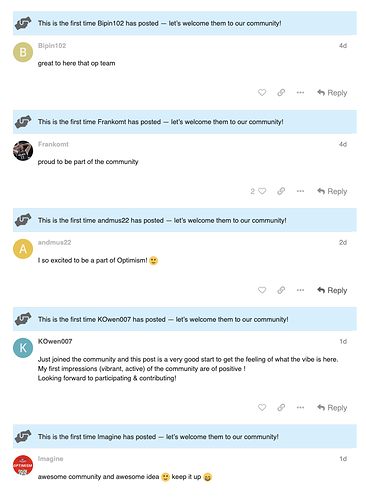 For voting: a ton of noise in vote outcomes, again because people will do the minimum: vote (YEA, probably) without reading the proposal

It’s not simple participation you want to incentivize – it’s quality participation by a broad, informed citizenry. Incentivization of some sort is probably in order, but achieving that sort of participation is probably more of a slow grind, facilitated by structural changes (in the vein of what @raho proposes here) and, of course, effectively demonstrating that participation in governance is worth it.

You can’t invoke that Munger quote without actually thinking about where your incentives will lead.

I don’t have a formal opinion on governance incentives… But I do think it’s worth noting that the total number of voting addresses has consistently been up each cycle despite the votable OP supply decreasing. 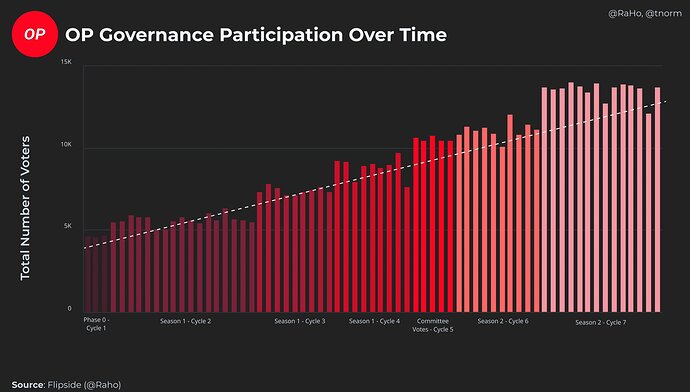 In a plutocratic setup like Token House, we’re trying to solve for % of votable $OP tokens participating in governance, not number of voters. With more projects applying for grants it’s no surprise the number of voters is up.

Thank you for that beautiful graph but like Polynya has mention, we are trying to increase total OP delegated.

In last cycle, three proposal were approved by Token house with just 3% of $OP in favor, with one as low as 2%. 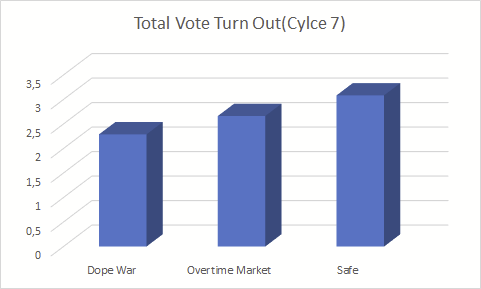 I see, you are right. You are looking at total delegated token which is close to 11% of total $OP supply and I took the total supply to prepare the graph. What I am advocating is increasing total OP delegated by encouraging users to delegate( will update my last comment to reflect the same)

Haven’t spend time reading on how not/including Abstained vote will impact, so cant comment on that.

By this metric, we want to increase “Votable OP supply” as well as activity within that (i.e. much more than 25%). For a token with ~240M circulating supply and>4B total, 22M is pretty negligible.

If you want more holder participation, remove the requirement to delegate; allow all token holders, and include LP holders + stakers. This is all technically viable within custom snapshot strategies.

What percentage of circulating supply is eligible for delegation? Some holders may be prohibited from delegating and others may be using their tokens for other purposes.

There are 2 things I want to address here.

The first one is the amount of time required to be “involved” with the community. We could ask around but my feeling is an average person with a day job has 30 min to 1 weekly hour to spend here if not less and it’s impossible to catch up. If we want to capture the attention of these people then we need a 10min daily TLDR for them.

The second one is delegate participation. In this case, I ask myself

Personal opinion, I prefer people to find that if they get involved sooner or later could have some sort of compensation. But those who are here no matter what have a bigger interest and that is to keep Optimism as the priority and not themselves. That is the kind of people I would want to be involved with optimism.

It would be nice to see not involved delegates losing some % of their delegation every time they are not active and distributing that % between active members. You may think this is against people choosing their own representation but in the end, they choose someone not representing them at all. At the same time, those who want to participate will know some % delegation will go their way if they keep getting involved.

You could have a Kleros style voting system.

Each voter puts up a stake to be able to participate (this could be airdropped initially). The proposer can also place a nominal bond or a nominal amount of incentivisation OP can be placed as a bond.

Different types of votes can have different levels of minimum stake requirements depending on the complexity of the proposals within those sections. The more complex votes with higher stakes ensures that those participating in those votes have the required competency and skill set to be able to vote coherently.

The vote totals would be kept hidden until the end of the vote cycle. If everyone votes 100% coherently, then you receive your stake back and the nominal bond is split between everyone. If you vote incoherently, you lose a portion of your stake and the cumulative lost stakes are split amongst the coherent cohort.

This system forces people to do individual due diligence and also have actual skin in the game. This would probably need a rework of the incumbent delegation system, but I feel it would cut out alot of the noise that exists now.

I heard about the SoulBound token before and that would be the best in my opinion. With that, voting would be more democratic. A way would be sought for the community to commit itself more to governance. Then there would be the part of encouraging the vote, but that is something very easy to achieve. Look at the example of Los NFBeez of the GnosisChain 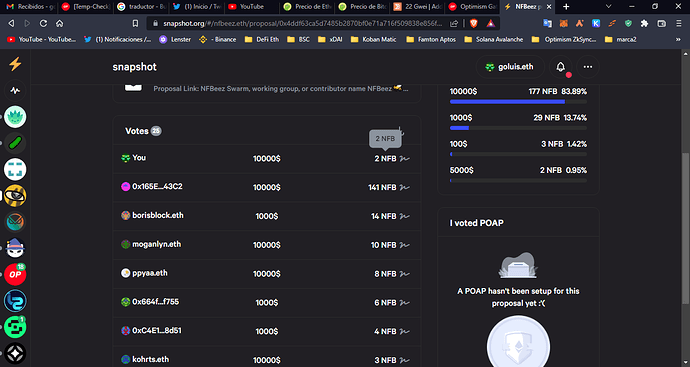 You are right, one address one vote has many benefits and Optimism Citizen house will use the same approach for voting, its more democratic as you mentioned but in token based gov we need to look for different way to motivate users so that they are willing to participate in the gov, either self or giving power to someone else (delegation)

This is definitely an option but I am afraid it require complete framework change and need wider discussion.

What do you think of this? Similar thought from nickbtts as well.

Distributing reward on basis of gov engagement could have domino effect. If Alice gets more reward compare to Bob because her delegate is active then Bob might do his research and either self-delegate or delegate to someone he finds more active in gov. Reward will help with rational ignorance and it could increase total token in delegation.

If you offer a reward, you will have plenty of voters. This is not duty!! If instead you make a demand to be able to interact or to gain an extra benefit, you could get the habit of voting to obtain a better benefit. this would be part of the protocols that make life in the network

I think you got me wrong, I’ll make an example

In your Alice example, you assume delegators get some sort of reward, but this is not the case, it’s just a soft rebalance of delegation into active members.

Now that Agora is going to be approved if Alice delegated to member A, the next time she goes into the Agora dashboard as a delegator, she will see:

This will also give new and small active members a way to earn their sit at the voting table as long as they keep being active.

I noticed around 300 wallets voting with 1 OP token , they may be airdrop hunters