Many projects are distributing their governance fund either Phase 0 or Phase 1 on full swing, this thread will cover a low level overview of their usage and impact on OP ecosystem.

I will manage this single thread for all proposals and will update accordingly.

It is clear that protocol has seen overall growth after the incentive was announced. Their TVL has gone up 6X and weekly address transaction was around 250-300 in July and as of writing its shot up to 7K. (This sudden spike in address count might be because of OP Quest)

They are following their commitment in Phase 0 proposal and their LP rewards program lasts 6.9 months (209.875 days) and it’s been 74 days since they launched the program

Note: If there is any mistake and need change, please share the source and let me know.

Transacting address :- Reaching 10X and now hovering at 2X
Cumulative TVL :- 10X
New user :- Average of 30 in august to 1K in Sept(might be because of OP Quest)

They are spending 15K OP/week for their Thales/ETH LP stake reward according to their proposal and 20K OP/week for other trading activities(I assume this is coming from 40% of allocation).

Its been 8-9 week since they launch the program and they can go another 10 week with staking reward and circa 15 week with their other allocation.

on the other hand their daily first-time users are going down during last month.

Note:- Please let me know if you see mismatch in data and i will correct it.

Initial Distribution plan as per their proposal:-

They decided to overturn their GF Phase 0 proposal agreement by their own DAO voting.

Personally, I think this is the first example of total misuse of $OP incentive. Batch voting was not a good idea and it was discussed a lot when governance was introduced but I believe foundation put lot of trust in Phase 0 recipient and Aelin turned out to be learning lesson.

More on this here

Slingshot is doing token distribution according to their plan mentioned in Phase 0 proposal.

Comparing the week of 8/15 when they launched the promo vs the previous week, there is 4.6x increase in users / 8.4x increase in transactions / 4.3x increase in volume on Optimism

Comparing the week of 9/19 when we launched the promo vs the previous week, there is 7.2x increase in users / 16.6x increase in transactions / 23.4x increase in volume on Optimism

There is a significant growth on Slingshot platform both in term of total volume swap along with active wallet. 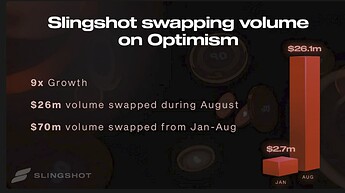 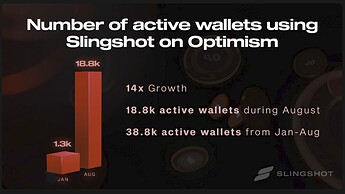 Additionally, Slingshot has ran two “past swap” promos that they used to retrospectively reward regular/loyal users and to help drive organic use of the Optimism network.

Note:- I am not doing validation of any kind from my side. Data is taken from Dune along with information provided by Project team. Huge shutout to Brandon and @cathy from Slingshot for offering help.

This is a great idea @OPUser!

You can find more in-depth Rubicon data on our Dune dashboard and Optimism’s Project Deep-Dive dashboard.

This is a very good idea!

Gauging the impact of governance fund to all these projects on OP ecosystem serves as feedback and also help community towards allocating to projects that might want to access the fund in the future.

Hi folks — regarding the discussion around accuracy of Velo’s metrics: want to draw your attention to these summaries from OP Labs’ analytics team on Velo’s affect on TVL. 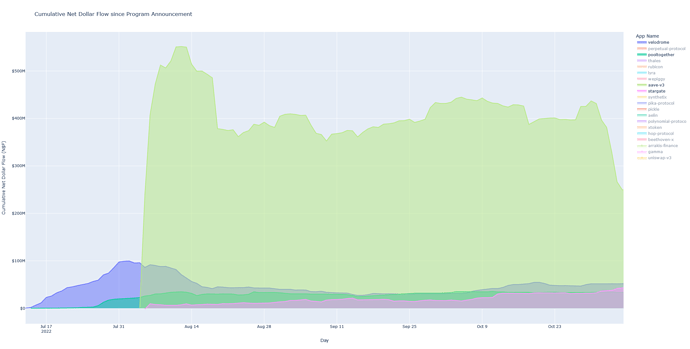 Stargate was definitely a surprise, they got 1M in $OP, 500K is locked forever, 400K for LP reward and rest 100K goes towards partners building on top of it. [Commonwealth]

AAVE is shadowing others here but interesting to note the dip on 4-5th November. Their OP Incentives start date was on 4th August so my guess is that either incentives are over or liquidity is moving a different place because of better reward(their TVL is also going down too but holding relatively well at 300M, peak was at 600M).

After removing AAVE from chart.

Stargate incentive begin on 5th August which explain their sudden bump and from their a continuous rise (TVL change from 14M to 60M as of now), same goes for Pooltogether in net flow term but their TVL( from 2M to 35M) is still holding well given that their current incentives will end on 15th Nov. (But here I am little skeptical as there is new proposal from Pooltogether so that might be a holding the liquidity)

So what we can learn from the chart:-

not in the twit but I have absolutely no idea what Perp(they got 9M $OP in Phase 0) is doing with their net flow of enormous 6M USD. 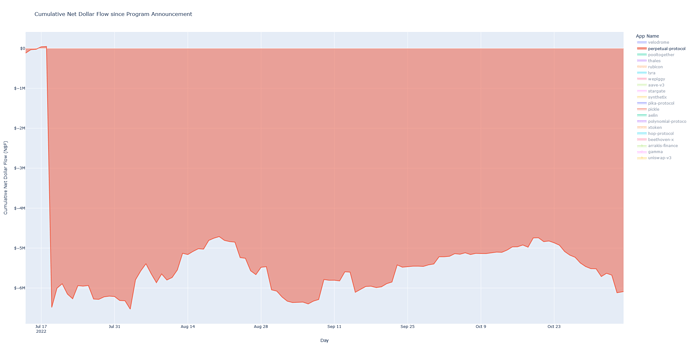 Data, on-chain data from independent third party is necessary to evaluate proposals going forward. I wont recommend spending 10M $OP again in one season just to boost liquidity for 6month and then down we go once incentives are over.

I think if anything it’s incumbent on protocols to show the work themselves. Breaking out Dune or Flipside charts is just as transparent as anything provided by a third party – all the work is shown, open source. When we ask protocols for data, this is the level of specificity we should get.

We need to wait for few more weeks to to make an informed decision but as of now we were right in saying that liquidity incentives only work for bootstrapping initial liquidity and user, giving jump start to a protocol, after that a protocol need to either sustain on their own or find a new approach to target user and liquidity.

Can you explain how you arrived at this conclusion and cite examples? Because I don’t see how what you’re saying follows from this chart.