Here’s what I post in #suggestions channel on Discord. I’ll post it here to facilitate more serious and constructive discussions:

Hey team, one big thing that draws me to Optimism is its promise of governance innovation, but currently, i’m not seeing a lot of effort, especially in terms of engaging average users in governance. A voting cycle is a big deal right? But I’m seeing little to no discussion around the proposals from average users (this observation is largely based on my native language channel which is relatively active). I think one factor that discourages average users from participating is knowledge. It’s not realistic to expect the majority of users(voters) to be techie or financially literate, but imo there’s still a lot that can be done to lower the barrier. For example, educate the community about some frequently used terminology in the proposal (like "matching incentives - i have some vague idea but don’t quite understand what it means exactly). Also, maybe share with the community some important criteria when making decisions. Another thing is that the proposals submitted by many projects are not considerate of the average voters at all - “GYSR is a platform for on-chain incentives that’s compatible with any ERC-20 or ERC-721 tokens.” - wtf does this mean? (again speaking from the perspective of an average user, not techie, not patient, not dumb) This is not the team’s fault but I think there’s still a lot that can be done to hold those projects to a higher standard in terms of proposals submitted. Another idea is maybe starting an Optimism Governance podcast, inviting the project teams, especially those without a final product, to discuss their efforts and visions (like Optimistic Railway in this voting cycle), or invite two delegates with strong and opposing opinions to debate, etc. There’s no guarantee that these measures will entail better decision-making, but imo these efforts could be a good start and more importantly, demonstrate to the whole Web3 world that Optimism is passionate and optimistic about governance.

Regarding the facilitation of a more understandable and average voter friendly project proposal, discord user@PaperImperium seems to have good ideas, and the team could reach out and collaborate: 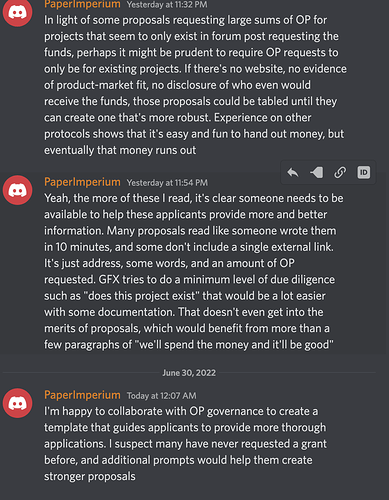 #2389 pointed out that podcast might not be a good idea because “Nobody listens to podcasts.” I don’t disagree. As I said it’s just my rough thoughts and I rarely listen to podcasts myself lol. It just occurs to me that podcast appears to be a thing on CT (Zero Knowledge,Bankless etc., even CityDao has a podcast dedicated to the project). I guess it’s more of an attention game than the actual number of active listeners.

And attention game is worth playing. On one hand there need to be concrete solutions to educate and lower the barrier to governance participation, on the other hand the team needs to put up a show, actively promoting to the wider Web3 world that there’re efforts being made and interesting governance happening here (The recent Maker Dao episodes is actually a good example, ppl discuss it on Twitter. It doesn’t always have to be that dramatic ofc - it can be optimistic). Imo spectatorship is a hidden crucial component of governance. With the show comes the spectators, who are also likely to turn into participants.

This is not the team’s fault but I think there’s still a lot that can be done to hold those projects to a higher standard in terms of proposals submitted.

You are right its not teams faults, its our fault. Let me ask you this, did you ask the team for clarification if you didnt understand any line/statement from their proposal.
I know, writing the proposal is like writing a user story and sometime we miss things or just assume some terms as we are quite familiar with those, its hard to look from others perspective.

And that is why we have 3-4 weeks of time to ask such question from the team, get those doubt clarify, it not their faults, its ours if we are saying that those lines are too technical or not clear.

For queries like this, this gov forum along with discord channel is there. all you need is motivation and interest to ask

Imo, its not the resource that we are lacking, its the motivation to participate and that you cant teach. You can lead a horse to water, but you can’t make it drink.

The average voters, myself included, are impatient and lazy. I agree that it’s a problem that cannot be solved, as you implied, but it’s a reality that needs to be dealt with or improved.

An average voter went to snapshot, opened the proposal, found it difficult to understand and gave up, not bothered to go to the right place and ask the right question - this is the reality. How about the moderators in general and language channels collect some frequently asked questions and make a post to address them or some periodic reminder to average voters that “you have 3-4 weeks of the time to ask questions in xx channel?” I’m not looking for magic solutions.

Currently there’s no “vibe”, both within the community (except among a very small group of dedicated ppl) and to the larger Web3 audience.

Just to be clear when I say “and attention game is worth playing,” I’m not doubling down on the podcast idea. My point here is that make the effort AND communicate/show it to both the community and the larger audience

Hi @chloeee - just wanted to quickly mention that I know the team is for sure working on this…much to be done of course, but that for sure the Optimism Team is aware of this and involved in iterating to keep improving and making things become more effective!