I mean it’s kind of fine, if it gets pushed to the next round (so long as there is OP left

). Would just like to know what I did wrong and which rule I broke since I spent quite some time to make sure all rules were followed.

It’s already a lot of proposals for delegates to think on! I am also a delegate and I have not even read half of the proposals yet.

Pushing our proposal further does make a big difference to us as it means we will have to switch our planning and have a potentially big project on a “maybe” basis for whenever next round ends. As an opensource project whose main source of income is grants having a clear answer (yes or no) for funding a potential big project is crucial.

It does though seem a bit more severe missing an entire proposal!

Edit: I have just noticed they are going to also need to update the snapshot vote for the projects mentioned further up in this discussion since its wrong there also. It looks like having delegator approved makes a difference for general voters when selecting to support a proposal or not.

As we are closing Phase 0 and starting the vote on Phase1, I have shared some thoughts on “Accountability” of token being distributed to the project(s), would love to hear your opinion and feedback.

Phase 0 has officially ended and soon team will unlock 36M OP token and distribute it to the Phase 0 projects. Same steps will happen for Phase 1 projects when voting will end for Phase 1. Similar to Phase 0 proposals, I have gone through all the Phase 1 Proposals, I have followed them, suggested them something and learned something from them. Now, I will cast my vote and would like to know how the project(s) are spending those token given to them. Some are saying I can follow the token recip…

Check this document where you can see the proposals to vote, it will be updated? I have seen that some last minute proposals have been submitted such as MakerDAO and LIDO.
We should be clearer with the steps or there should be a pre-selection before dumping the proposals to snapshot.

Hey @Defi_LATAM_axlvaz! MakerDAO and LIDO are still marked as DRAFT, so they will not qualify for this round. I guess there will be another date for the next round. Deadline for this submition was June 23rd, so either they didn’t get in time, or they were planning for next round already. I guess they were too optimistic.

Candide is also missing from the list. It was marked as Ready on June 23 after being reviewed for feedback and signalled to be ready for voting by at least one delegate.

I think it would be a good idea to have a thread or a channel on discord where delegators can post what projects they support and edit their support for a project up until the voting begins.

at first to break the ice someone just made a proposal out of nothing,
we have to see more good proposal to improve it

Hi all, the above feedback on readiness and approvals have been incorporated with modifications to/additions of Proposals K, P and Q. Before the next cycle, so that we’re not in this position again, we’ll include an update to the OPerating manual to better specify the cutoffs and include a buffer between the cutoff and the next cycle start. Will also include more explicit delegate sign-off measures, again to limit repeated confusion.

I am wanting to vote with my op funds since the person I delegated to @tongnk has not voted for what I would like to see. How can I vote in this round and remove my support for him as delegate?

It’s very sad to see how pessimistic the voting community has been in the first three days of voting.

Here are 17 groups of people who are ready to dedicate their careers to the Optimism Collective and attempt to drive the growth and usage of OP …Yet the Voters are like, “Nah, you’re not welcome here. Don’t bother.” to all but the predictable 4 or 5 of these groups?!

So far, this appears to be hardly the welcoming, inclusive and positive community that was promised, that works in solidarity to realise the vision of Web3. In fact, it appears to be quite the opposite. Sad, and kind of disheartening.

I hope my thoughts above are proven wrong in the final 11 days of voting.

I see projects with a lot of yes voters but there are some big delegates that seem to not be reviewing projects and just voting no on everything but the 1 project they are trying to get past!

dForce has started liquidity mining in optimism, and the yield is very high. I hope dForce can get OP incentives to attract more users and higher TVL for the optimism ecosystem.Support better projects like dForce!

Or at least if some of the more powerful, early voters had been less pessimistic and had voted ‘Yes’, then a new/different psychological ‘anchor’ would have been set for everyone logging into Snapshot, and the anchoring effect would mean all projects would have a lot more general, less powerful ‘Yes’ voters.

dForce (Proposal B) just launched liquidity mining on Optimism! Check out more through: 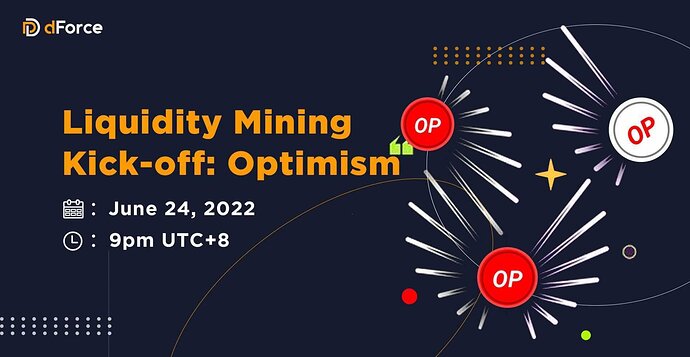 I have noticed a few delegates voting NO for their competitors in some cases or voting for a project which they support in the similar category and voting for something similar with NO.

I agree with others that there needs to be a committee on ensuring delegators are held accountable in decisions and removed from been able to make biased decisions. A couple of delegators active here have ABSTAINED, but others have not!

Il be voting for Infinity Wallet. Its the best wallet in the space by a far and will play a large role in mainstream crypto and defi adoption.

I have voted for the current batch proposals, these are my final votes:

I have submitted my brief feedback in their respective threads (except a couple that were no-brainers either way and others had covered everything I wanted to say).

Here are our votes for the current cycle.

Similar to polyna, we provided brief feedback in their respective threads and look forward to future rounds.