Proposal for token distribution: Distribute OP tokens to QiDao to grow the protocol on Optimism.

QiDao is a decentralized collateralized debt position stablecoin protocol where users can deposit tokens as collateral to issue MAI, the protocol’s decentralized stablecoin. It is the largest stablecoin protocol on Polygon, Fantom, Gnosis Chain, Moonbeam, and Moonriver. QiDao was deployed on Optimism two months ago and has seen explosive growth in relation to other chains the protocol is operating on. The goal of this proposal is to explain how to use this grant to increase the growth of QiDao and the Optimism Ecosystem.

QiDao is well integrated into the Optimism DeFi ecosystem, having sizeable liquidity on all major DEXs and bridges. MAI has also been accepted into Aave V3. Future integrations include Beefy, with whom QiDao has a multichain strategy with, Arrakis, and Optimism token (adding OP as collateral for MAI).

Additionally, QiDao has a community within its DAO that is committed to growth on Optimism. They call themselves the Optimism Alliance. They have been bribing QI voters weekly to vote in favor of Optimism vaults to receive borrow incentives. That has earned Optimism an added $10,000 of incentives per week!

Breakdown on incentives QiDao is currently providing to Optimism users:

Not only is QiDao matching incentives, we’re exceeding proposed incentives on Optimism by 1.7x.

Supporting MAI liquidity on Optimism will encourage users to lock value on Optimism in the form of collaterals. Since MAI charges a repayment fee and no interest, locked value has a longer lifespan than it does on other lending and stablecoin platforms. This is due to users being incentivized to keep their debt positions open.

QiDao has voted to add OP as collateral for MAI (for 0% interest loans). This will allow OP hodlers to mint stablecoins against their OP instead of selling. If Optimism supports MAI liquidity, then more users will choose to borrow against OP rather than selling it.

MAI has consistently been a top volume provider for Curve on Fantom and Polygon, where MAI is the largest stablecoin protocol. This is because MAI pools have a higher volume to TVL ratio than most native stablecoins outside of Ethereum.

Growing MAI’s liquidity will allow more users to bridge value from other chains. MAI is currently one of the most crosschain tokens in crypto, with 20 chains available. As a result, it functions as an effective transfer of value across chains.

MAI’s 0% interest and repayment fee model encourages users to lock tokens on their home chain and keep loans open. This creates a resilient TVL for Optimism.

For the past few months, QiDao has operated on a net profit (revenue has exceeded emissions). This shows that QiDao has built a durable model that can thrive without outsized emissions.

After OP incentives end, QiDao will continue to incentive usage on Optimism as it has for the past several weeks.

All incentives will be exceed by our emissions to Optimism users. Currently, QiDao will give $1.7 for every $1 of OP incentives.

OP token vaults will receive borrow incentives based on a bi-weekly community gauge.

Dumb feedback, you should add Optimism to your web page. 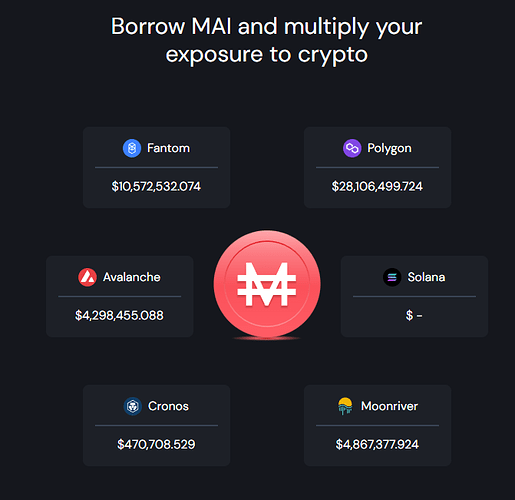 I did not know about this project I’ll dig into it. Nice to see new projects focused on stablecoins.

hey @Benjaminqidao do you mind elaborating on how the liquidity incentives distribution will look like, as in which pools will be incentivized?

Good idea to improve the ecosystem

Its good that incentives are matched but I am reading this

For the past few months, QiDao has operated on a net profit (revenue has exceeded emissions). This shows that QiDao has built a durable model that can thrive without outsized emissions.

and total number of OP requested.
Why are you requesting 1M if you are confident that your platform is self-sufficient to hold the users.

The pools to be incentivized are likely the MAI pools you see today. MAI is on the major DEXs on Optimism: Velodrome, Beethoven, and Curve. I think deepening that liquidity should be the goal.

That being said, QiDao is community-run, so final say goes to the DAO.

QiDao is stable at the moment. These incentives are meant to help catalyze further growth on Optimism.

Aside from that, having official support from the Optimism community will help divert more QiDao resources into building on Optimism. This will result in more QiDao products on Optimism, like QI staking and adding OP as collateral for MAI.

Please make this happen, QiDAO has been one of the OG stablecoin/defi protocol, battle tested.

I have been enjoying OP defi yields during the past month or so, this partnership will make OP defi opportunities more attractive. Im all for it!

Thank you for your support!

As alluded to on the proposal, QiDao is currently voting on accepting OP as collateral for 0% interest loans.
link to vote: Snapshot

The benefits to OP are tremendous. Users will be able to hodl OP long term while using its value. In contrast to other protocols with similar functionalities, QiDao does not charge any interest- only a small repayment fee. This incentivizing people to keep their OP locked.

One input on Phase 1, there wont be any Phase2/3 or 4, Phase 1 is continuous activity as long as all fund are not distributed. Source

On the proposal, I dont think using 1M OP token on just LP incentives is right move as it will only bring artificial liquidity. Unfortunately, I dont have any other suggestion.

QiDao is an interesting project for Optimism but it’s growth through basic liquidity incentives is not the optimal use of Op tokens. We prefer to fund long-term growth initiatives.

For starters, some part may be good for liquidity initiatives to move users over to Optimism, establish long-term, deep enough liquidity pools and get users to lock funds and mint Mai.

We look forward to see most of the incentives targeted towards growing an ecosystem around QiDao/Mai on Optimism or in a way that utilizes Optimism (ecosystem) well. You could incentivize builders, integrations, partners - even leverage success tokens to help your partner projects onboard to Optimism too.

For starters, some part may be good for liquidity initiatives to move users over to Optimism, establish long-term, deep enough liquidity pools and get users to lock funds and mint Mai.

In terms of levering other protocols, Beefy just launched on Optimism. We have a long standing partnership with Beefy and adding their interest-bearing tokens as collateral for MAI.

In order to allow users to freely lever those assets, we also need deeper liquidity for MAI (aside from the liquidity that we are already incentivizing on Optimism).

As you can see, a lot of growth does depend on liquidity mining. We, as QiDao, can’t allocate more incentives to grow liquidity on Optimism without some support from Optimism itself. As we see that support, we can increase our activity on Optimism.

10% of tokens will be distributed in the form of grants to users and developers building tools and partnerships to help the protocol grow its presence on Optimism.

LFG! Looking forward to this!

After giving some thought, I think 900K OP token for LP incentives are not aligned to our long term sustainable growth.
This will only encourage short term artificial liquidity and I wont be supporting this proposal in the current form.

I am appreciative of two things in this proposal:

Lots of projects promise 6 months, or 9 months of runway - however it is not reflective of how a DAO is truly run and how runway is calculated. USD price is still the standard for accounting and budgeting.

It is my understanding that the team can still apply if there are funds remaining GF: Phase 1 after voting cycle 2 concludes. Thursday 3 pm ET Voting Cycle 3 will begin for the recent projects which have progressed into the [FINAL] stage.

As for the merit of liquidity mining - yes it can be artificial volume. But is it lucrative enough to attract users to Optimism from other chains? If the answer is yes, then the program may be worth it.

Question for the @Benjaminqidao team: would you consider matching incentives in $MAI?

QI is better than nothing but still an inflationary token. A more stable asset leads to more retention.

A great proposal. Lets see what others feel about it.