As someone who has been active in the Fantom ecosystem and someone who was present for the Solidly launch and participated and observed these events unfold, I have to categorically object to your portrayal of events.

Solidly deployed by Andre Cronje in a decentralized, trustless, immutable contract/protocol. The NFT’s were given not based on merit but based on TVL. The Byte Masons used the NFT they were given within the bounds of how the protocol was meant to work. Andre chose to release the protocol as in an “experimental” state against concerns from other Fantom developers. The dilution protection for veNFT holders did not function as intended among other features which doomed the Solidly to failure.

Any actions from the Byte Masons had zero to do with why it failed to say otherwise exposes a lack of understanding of the protocol and what actually happened. Andre’s trust, abused or not, and what other feeling you or he may have should have nothing to do with Decentralized Finance. Nothing was stolen it’s all on chain if anyone cares to think for themselves.

The idea that the Byte Masons are responsible for Andre “rage-quitting” is preposterous and also irrelevant. Andre is a grown man and a billionaire. He is responsible for his own actions which include causing harm to the multiple protocols in the manor he announced he was leaving de-fi.

FantomFunhouse clearly has an agenda to derail this proposal driven by a personal vendetta which is embarrassingly misdirected. And it is very concerning for OP governance on the whole if one person can spam accusations while the merits of the proposal are lost in the posturing.

This is profoundly untrue!

I guess I’ll pull my money out and bridge it back to FTM.

This isn’t discord, telegram or whatever… people is free to do whatever they want but please move this kind of debate to somewhere else.

if this kind of treatment continues I and others may simply abandon OP.

For being honest? Yes it is very constructive. It demonstrates a very valid point.

Unfair treatment and spreading misinformation about the people behind the proposal leads to mistrust of the community and thus people will abandon OP.

No mud is being flung except by those making false claims?

I don’t know or understand why some people moving funds out of optimism is relevant to this proposal.
The proposal is about:

Intentions: We plan on using $OP incentives over the next 9 months to match dollar for dollar with $OATH (additional $GRAIN emissions to boost yields once it goes live) & drive sustained adoption of Optimism using strong horizontal integrations, which we will describe further below.

By the way, many people here use more than one L2 and more than one L1 and we will not move our funds because of things like this. Meanwhile if you want to put pressure on voters because you may leave optimism then I have to say STOP! You can move this funds when you want, you don’t really need to wait. If it’s the best for you and for the proposal we can understand and respect the decision.

I am simply stating facts without putting pressure.

Meanwhile the false claims have already muddied the waters and has done much more damage to protocol that wants to be here and build on OP.

I am simply stating facts without putting pressure.

How people moving funds out of Optimism would be relevant to the proposal? Let us understand what is wrong here.

Hey guys just chill… Everyone understood people are still mad about solidly, just give them some time to build and earn your trust. Stop fighting

What did fantomfunhouse say that is relative to the proposal?!? 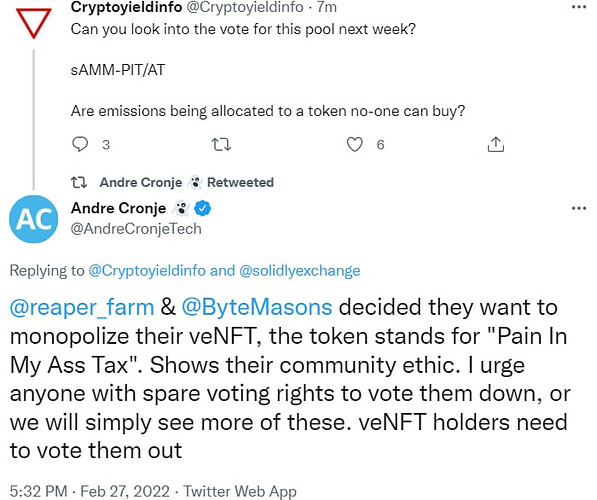 image700×586 82.4 KB
Direct evidence from Andre citing the problem that reaper was intentionally causing. Main reason I am voting no on this as this displays reaper’s community ethic and negativity that is not needed in Optimism. However, I would like to support Granary’s proposal if it was made independently from Reaper.
DeFi_LATAM_Joxes July 30, 2022, 9:42pm #103

We appreciate that the different initiatives that are planned to be promoted and deployed around Optimism have been explained, but we do not see it as appropriate for it to be a proposal for different protocols and initiatives, live and in development. In addition, given the discussion started here, I suggest patience and being able to evaluate each aspect in detail is important.

Suggestions: Said this, splitting this proposal according to each project, evaluating it individually is a good approach, first for active protocols (an isolated proposal for Granary for example, rethinking in a reasonable amount) and then for future initiatives. Meanwhile the community and delegates can reflect on the events described here.

hi guys
I liked it

Abstaining - too much controversy regarding solidly launch