Token holders have recently passed the new tokenomics proposal which outlines two programs that can support these goals:

Our plan is to have these tokens allocated towards three type programs. One key thing to note is that given our history of experimentation, we may scale incentives up or down depending on the outcomes of each program. Our goal is to ensure that we don’t overspend and that we maximize the impact of these tokens.

okay so there are different classes of OP tokens, only some of which have governance rights?

Tokens acquired via the governance fund are done so via a proposal which outlines the plan for those tokens very explicitly, then voted on accordingly. If using the allocated tokens for governance is not outlined explicitly in the proposal then no, those tokens should not be used for governance as that was not part of the voted on proposal. Do you disagree?

that’s a well-considered, precise way of saying that governance tokens are only conditionally so

i think it’s important to understand what the implication of what you’re outlining is, though, because whatever these protocols are getting, it’s not the same thing as what i have when i do get to vote. either that or my OP is not what i thought it was.

But you’re not obtaining your tokens through a governance proposal, that’s the difference. Every proposal is conditional based on what they are actually proposing, that’s the nature of a DAO. I appreciate the discussion

the method of obtaining the tokens seems completely arbitrary? If Optimism wants to control how grant tokens are delegated, this is something that would need to be solved at the token/contract level - right?

its underhanded to want to use tokens that have been freely granted to a project, to participate in governance? While I can see the potential for a negative impact from grants being delegated, would you feel the same way if teams delegated to existing delegates?

How will new delegates be introduced - at size - if grant tokens are not delegated?

Let’s say a team does this, would you exclude them from future grants? While it is true, proposals have not addressed delegation - neither has OP foundation or delegates themselves prior to this, recent discussion which is coming after funds have already been distributed.

it is ridiculous to accuse some one of “lying” for using a token for its intended purpose, even if those tokens are also being used for other purposes! $OP is a governance token, simple as. Any holder should, and ideally WILL, be participating in governance.

My suggestion would not be to accuse an existing partner - who is making a good faith effort to discuss this issue, and seems well aware of the thorny nature of this - but rather to develop a standard that can be applied proactively, in the future:

Any new grant must articulate plans for delegation.

Again, the proposal had no mention of delegation. And yes I would not in favor of them delegating 9M tokens, since their proposal never indicated directly or indirectly they were going to use the tokens for delegation.

How will new delegates be introduced? same as it happened the first time around with the added benefit that protocols CAN select to have a reserve for such case, they just need to be upfront about it.
Which is why some of us have created this nice thread that now includes updates to the template Update of the PHASE 1 protocol nomination template

As for the accusation of lying, I will paste the merriam-webster link and let you take your own conclusions of a very straightforward definition. Lie Definition & Meaning - Merriam-Webster
Note verb (2), second entry: to create a false or misleading impression

Ultimately i think the responsibility rests on the Collective to recognize that it has limited means to enforce limits on delegation. The most it can do is restrict further grants to these organizations, and frankly it should begin to budget the diffusion of voting rights to grantees into its decision-making.

As an aside–it’s not necessarily a bad thing; member protocols are legitimate stakeholders! Though concentration in general can naturally be problematic for its own reasons, and of course that’s why we have a bicameral governance structure in the first place, to mitigate many of these concerns.

Let’s say that Perp said, you know what, a governance token is just that – it is our right to exercise our governance power, and it was our presumption that we get it (not a lie if you take the right as given; i.e., it was not a thing you felt you had to disclose). They get 9mm votes in a governance structure where the average passing proposal gets 15-20mm yes votes.

What do you do now? Do you fork Optimism? Blacklist the wallet? Print more tokens? Who do you deal them to? If you do any of these things, I now know that my governance token isn’t quite that, that there are conditions. And that has long-lasting effects.

Please everyone stay in topic, this is about projects giving an unstipulated use for received tokens (acording to a Token Plan/Distribution proposed by themselves), in this case, self-delegation and obviously talking about possible negative impact.

Is OP a governance token? Yes.

Can protocols or any organization participate? Yes.

Can a protocol take OP tokens and give it a different use than thoses detailed in its proposal (by example, arbitrarily a self delegation >this topic<? No. Obviously anyone can say that they have ownership (objectively) but they shouldn’t, and we’re here to discuss and point this out.

Suggestions to minimize this risk? it’s welcome, properly in a new thread.

Can a protocol take OP tokens and give it a different use than thoses detailed in its proposal (by example, arbitrarily a self delegation >this topic<? No. Obviously anyone can say that they have ownership (objectively) but they shouldn’t, and we’re here to discuss and point this out.

If you’re directing this at me and others, we have been sharing our concerns precisely because you have no grounds on which to pronounce conclusively that protocols can’t self delegate tokens.

Nowhere in the rules prior to these applications or disbursements was there any mention of concerns regarding self-delegation. Governance hasn’t definitively ruled one way or another. OPUser raised the legitimate issue a few days ago, a handful of people stated that protocols shouldn’t self-delegate, and now a handful of people are disagreeing. When if not now would we come to consensus on this?

You can personally believe that people shouldn’t make claims to ownership, but you certainly can’t close the book on the matter or dismiss our concerns as not relevant to the issue.

Nowhere in the rules prior to these applications or disbursements was there any mention of concerns regarding self-delegation.

Because the assumption is that projects use their tokens for precisely what they said they would (if they don’t mention governance then we assume they will not use it for governance).

There’s no basis for this assumption, though.

I read and catalogued every single governance proposal through cycle 2 of phase 1. In my recollection there wasn’t a single request to use tokens for governance.

So either this assumption wasn’t shared by any of the applicants, or projects are sending a strong signal regarding the value of governance power on Optimism.

I read and catalogued every single governance proposal through cycle 2 of phase 1. In my recollection there wasn’t a single request to use tokens for governance.

So either this assumption wasn’t shared by any of the applicants, or projects are sending a strong signal regarding the value of governance power on Optimism.

As the incentives to scale Ethereum are aligned between MakerDAO and Optimism, it’ll be a great deal for both communities to save a % (up to Optimism’s governance) so that the Maker governance gains voting power in the governance decisions.

And this topic was duly discussed (authors removed it after an initial feedback but perfectly if it had been maintained and approved by others there would be no problem).

Hey there, appreciate the context. Hope you can understand how I would have missed this, as it was no longer in the proposal. 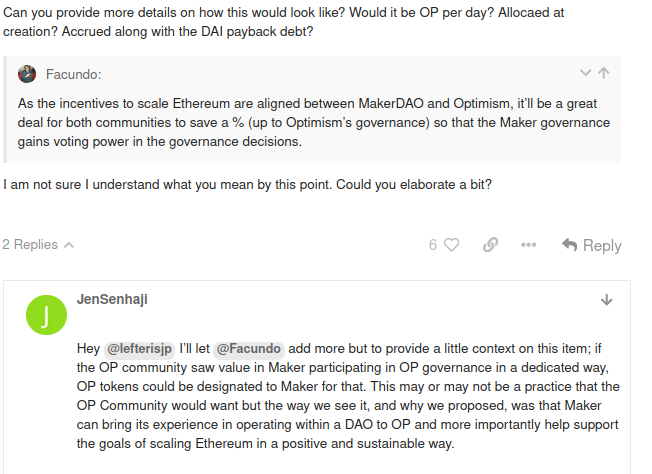 I actually read this as them asking OP to delegate some of their held tokens (i.e., not granted tokens in addition to their own) to Maker as a good steward of governance. This doesn’t presume that they wouldn’t have self-delegated their granted OP. If they were in fact asking to self-delegate, that would be the one case where someone had considered the possibility that the granted OP had conditions attached. 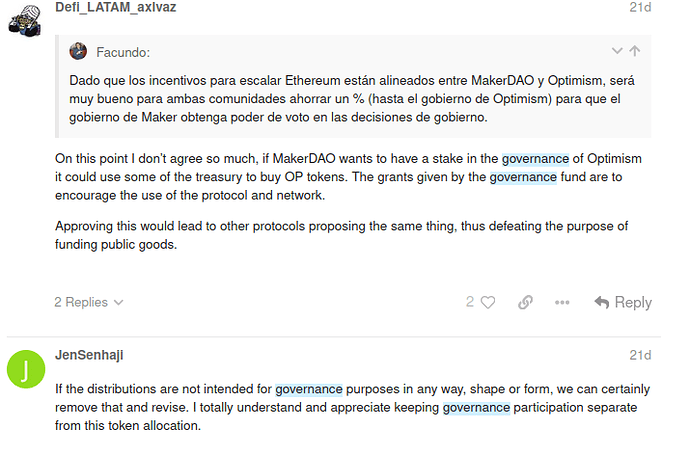 They respectfully backed off entirely when you individually made the claim above – which, I’d add, would appear to make this the first mention of such a standard. Their response suggests to me that these standards are conditional (i.e., specifically defined by each community) and not universally given.

Although I’d certainly invite @Facundo to weigh in here.

And this topic was duly discussed (authors removed it after an initial feedback but perfectly if it had been maintained and approved by others there would be no problem).

Sorry, what do you mean by “if it had been maintained and approved by others”?

I actually read this as them asking OP to delegate some of their held tokens (i.e., not granted tokens in addition to their own)

Yes, this was part of this section “How will the OP tokens be distributed?”.

(i.e., specifically defined by each community) and not universally given.

Yes, each community gives its point of view, but again, the first step to be correctly executed is to announce it in the proposal as part of the token plan.

Sorry, what do you mean by “if it had been maintained and approved by others”?

Yes I mean, if this draft would have been kept as it is and any member of the community with 0.005% of the voting power would approve its pass to ready.

Ok don’t hate me but your position is inconsistent then.

In that post above, you say that it’s impossible for Maker to ask for governance rights because then others would do the same, and this distribution (again, your words, nobody else has said this) is solely to incentivize layer and protocol use. You tell Maker they’re not even allowed to ask.

And now here you’re saying if only they’d asked for it and gotten approval it’d be fine?

This strikes me as unilateral rule making.

In that post above, you say that it’s impossible for Maker

Sorry, not sure where I (Joxes) said that.

And these cases can be interpreted in different ways, since this action (by example) wasn’t in the Token Plan, and it would be good if the project clarified this recent action. If any project expresses its desire to participate in some way it should not be misunderstood, Optimism is a protocol of protocols, and therefore we expect the participation of protocol teams, companies, DAOs, protocol communities, independent communities, organizations and individuals.

Before you ask, I’m obviously concerned that the plans will not be carried out as proposed.

In the worst case scenario, the project can simply lie and take tokens and ‘maliciously’ affect future decisions.

An then the reasons given later by others I agree with them (about this case particulary).