As one of my favorite philosophers once said “The future ain’t what it used to be.”

Curve will bring TVL to Op

Hi, thank you for the kind review, and also for helping me in my time of need when I couldn’t post my links and spambot even going so far as to cancel my post temporarily (oops)!

All links for the proposal listed here, for anyone interested:

On co-incentives, from what I understood, curve emission is part of the curve protocol, right ? Its not something special that you are doing only on OP chain ?

Curve emission is fundamental to Curve protocol, yes. (I realize I’m going overboard with links, sry).Curve gauges can and do exist everywhere that Curve does. This is important to clarify because if it required custom built functionality to work with Optimism, I’d be a little suspicious about whether the dev overhead would be manageable. Actually, the integration with Optimism already exists, it’s even trivial and permissionless to deploy a gauge and create an on-chain vote to receive emissions (you can do this from the curve optimism UI).

Do you have project or DAO budget in form of CRV ? Will you be able to provide any form of co-incentives ?

I consider the gauge to be Curve’s budget, and is the exclusive method for Curve to incentivize its liquidity pools. Currently veCRV voters direct something like 600k CRV emissions/day. There is a DAO community fund, but this is reserved for community and ecosystem grants, not for liquidity incentivization. I can appreciate the uncertainty of whether pools will receive gauge weighting, but I am confident that the current Optimism gauges will be well utilized- Synthetix has indeed been actively incentivizing its sUSD gauge. Gauges become weighted when there is some value in it to someone - either an LP wanting to boost their rewards or a protocol wanting to establish its stablecoin, or a veCRV voter seeing high utilization of a particular pool and hoping to increase revenue. It’s also a protective mechanism, to make sure incentives are distributed where people collectively get most value from it. I hope also that out of this discussion will generate interest in creating new gauges by up and coming protocols on Optimism

So I guess the problem is that (as currently constructed), this proposal doesn’t really represent Curve doing anything to bring TVL to Optimism. It would be the 1M in OP rewards doing that.

Drop 50k/week in direct LP incentives on Beethoven or Uni/Arrakis and you’d see similar results. Drop that much on Velodrome bribes, you’d likely be able to attract 2x the TVL. And any of those options wouldn’t come with the need for fees or bribes to head off chain.

I’d like to see this proposal reflect some kind of mutual investment from Curve and/or it’s major stakeholders commensurate with the ask from Optimism Governance.

I also continue to think that working with the foundation to explore a partner grant for a full Curve deployment on Optimism might be a better first step for all parties.

Can help make intros there if helpful!

Lido Finance is set to offer its staked Ether across all L2 networks starting with ARB and OP first out the gate. OP could become the main place to swap stETH if this Curve liquidity mining proposal goes through as liquidity begets liquidity. This could be a massive benefit to the OP ecosystem.

Is this a grant for Optimism growth or a fealty payment to Curve?

As others have mentioned, would it not require multiple other layers to be deployed onto Optimism to even get a functioning self contained Curve ecosystem on Optimism?

Why only now when grants are on the table has Curve decided to actually make any movements with Optimism, especially since Curve is so well funded on its own?

If you’re going to post from other forums, please post enough context so participants here can understand my response: 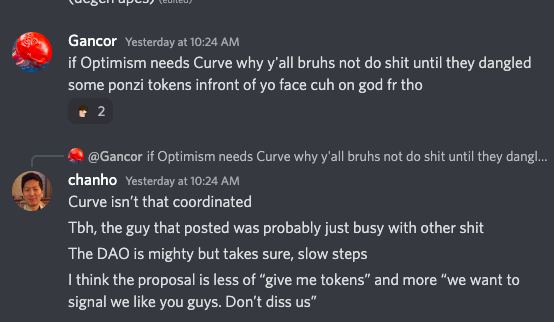 Incidentally, this poster seems to have made some kind of generalization about me based on my support of this proposal that may be affecting his judgment:

I was not sure if the Gov forum was family friendly so edited out my loose wording, thanks for providing the extra context though. I am highly skeptical of Op grants being easily granted to well capitalised projects where there is a large potential for it to be siphoned off chain and back to mainnet.

See my expose on Perpetual Protocol that did something more explicit here:

Perpetual Protocol was granted 9,000,000 OP tokens (currently worth around $6.5 million) in a Phase 0 Grant, the proposal for which can be found here. This large grant was voted through as a batch vote, and in my opinion I do not think enough due diligence was done when green lighting such a large amount of funds. 1. Perpetual Protocol v1 collapsed resulting in loss of customer funds to the tune of $44.6 million. Whilst it appears some progress has been made, there are still customers with out…

I can see a similar eventuality in this instance although not as blatant or as deliberate, but due to Curve’s main mechanisms being outside of Optimism.

Yeah, we’ve been working with Lido since launch. OP will certainly be the place to swap stETH, but we won’t need to send any more fees back to L1 than necessary to do that.

As some have expressed concern over mercenary liquidity and all the benefits of the program going back to mainnet, it may be useful to look at a previous instance of Curve being the beneficiary of such an incentive program.
From early October 2021 to January 2022, Curve was one of the protocols selected to receive a grant in WAVAX as part of Avalanche’s Rush program aimed at developing DeFi on the chain. The WAVAX grant was redistributed by Curve to liquidity providers of the aave (3pool equivalent with lending) and tricrypto pools. The chart below shows the TVL of these two pools over time, with the highlighted area denoting the duration of the Avalanche Rush program: 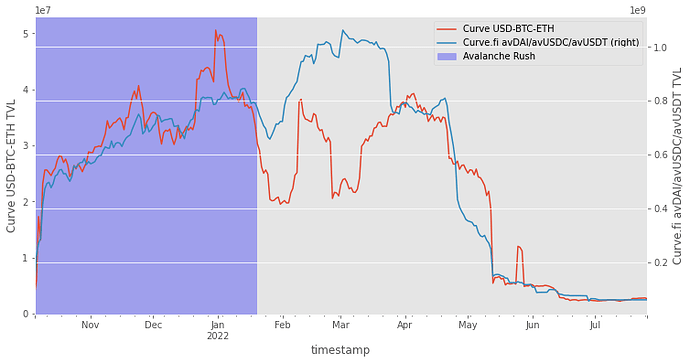 As you can see, the incentives (doubled with CRV incentives) proved extremely successful and helped drive the TVL from nothing to over 1 billion dollars. There was a TVL dip in both pools once the rewards ended, but this only proved temporary. By February both pools had recovered and the aave pool went to reach a new ATH in TVL and maintained deep liquidity until the recent market downturn.

Not only did the incentivized pools maintain their TVL long after the incentive program had ended, they also did so in a more competitive environment. Another stableswap platform with veTokenomics, Platypus, launched on Avalanche in January and went on to reach over 100m TVL (they too, benefitted from incentives as part of the Avalanche Rush programs). This should assuage the concern raised by the Velo team above, as it shows that competition is not a zero-sum game It helped increase the overall TVL of the Avalanche protocol while both competitors also increased their TVL. A competitive ecosystem on Optimism will bring more users and more value than a single monopolistic player.

Finally, one should note that the growth of Curve’s TVL as a result of the incentive programs also created many positive externalities as other projects built upon Curve. On Avalanche, Abracadabra, Beefy.finance, Blizz, Yeti.finance, Yield Yak are some of the protocols that offered products relying on Curve pools and yield, which themselves brought more users and liquidity to the chain.

tl;dr Liquidity stays on Curve even after incentives are gone; Curve growth strongly contributes to development of the chain’s ecosystem.

I want to be clear: I think a fully deployed Curve would absolutely be good for both Optimism and Velodrome.

Every new grant has an opportunity cost and dilutes those previously distributed, so we need to make sure the ROI is there as we continue to invest.

For me personally, subsidizing TVL and volume that will ship 50% of fees off chain may be a deal breaker given the existence of alternatives (not just Velodrome) that don’t require this kind of value extraction. Likewise for the requirement that projects will have to go to mainnet to engage in Curve governance to have a shot at having a gauge that might be eligible for the rewards.

If in the future these obstacles are removed, I’ll feel differently. I think the future is on L2 and Optimism users should be able to get the full Curve experience if we’re going to drop 1M in incentives on it.

That said, if these aren’t deal breakers for others here is something I think could make the proposal stronger.

Choose a single public good pool (like tri crypto) and vote to make it eligible for CRV emissions on Optimism. Then work with a collection of Curve stakeholders to commit to a certain amount of voting power that would be dedicated to this pool over the duration of the incentive program. Then request an equal proportion of OP incentives as a match or boost to those emissions.

This way, you are growing Curve on Optimism with OP incentives in a way that doesn’t gatekeep participation to those with mainnet presences. You are also functionally matching the incentives that Optimism governance is granting you, demonstrating a commitment to ecosystem investment.

Market nuked. Some coffee in the morning helps!

Choose a single public good pool (like tri crypto) and vote to make it eligible for CRV emissions on Optimism.

This is a good suggestion, thanks. (I hear this may actually be in the works already). We will discuss with Curve team about launching and gauging a tricrypto on Optimism. Tricrypto is indeed an important one imo

For me personally, subsidizing TVL and volume that will ship 50% of fees off chain may be a deal breaker given the existence of alternatives (not just Velodrome) that don’t require this kind of value extraction.

To be clear, we’re talking about 0.02% of volume being sent to layer 1 (not some random other chain). Assuming ~$1m volume per day, that amounts to $73,000 per year. I think it’s a bit hyperbolic to call that deal-breaker level “value extraction”.

Speculatively, traders could plausibly save that much on slippage alone. 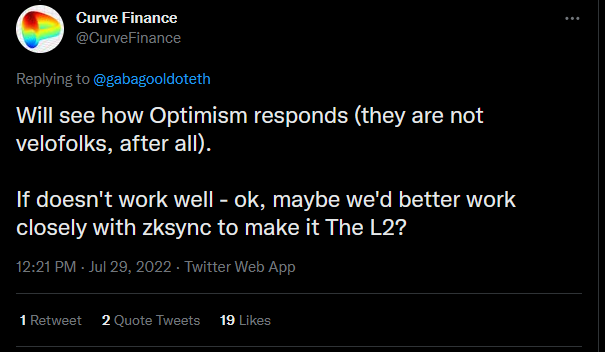 Not up to speed on this proposal but I saw this on the twitter feed. Pretty weird angle to take? Threatening to focus on a different L2 if they don’t get a grant?

I think it’s worth noting that the expected amount to be “extracted” to L1 is far less than the amount that Velodrome directly airdrops to veVELO lockers (~500,000 OP). These airdrops provide no direct value to the Optimism ecosystem and are essentially a subsidy to boost the price of VELO.

Indeed, the majority of OP funds requested by Velodrome directly benefit Velodrome development with no direct benefits to the Optimism ecosystem more broadly. For example, 600,000 OP are allocated to “protocols that integrate Velodrome’s liquidity layer” and another 600,000 are allocated to developing a “vote delegation and autocompounding feature that is directly built into Velodrome”.

By contrast, distributing OP tokens to LPs (as in this proposal) incentivizes liquidity on Optimism, a direct benefit to the ecosystem.

Given these details, it’s hard to avoid the conclusion that Velodrome is trying to push a double standard to “lock out” their perceived competitor.