NOTE: We have withdrawn this proposal following notice of a Partnership Grant but left the thread open for feedback and archival purposes 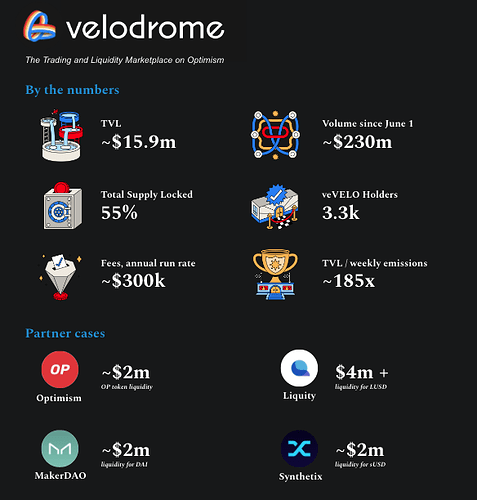 As of July 1, 2022. For live metrics, please refer to our community dashboard at Dune.

Velodrome’s top priority is to provide a deep liquidity layer for low-slippage trades on Optimism. Based on a ve(3,3) design, Velodrome rewards behaviors correlated with the long-term success of the entire ecosystem:

This design offers a capital-efficient, sustainable mechanism for protocols on Optimism to attract and retain liquidity. Protocols holding veVELO can incentivize liquidity for their token pairs in perpetuity with minimal dilution while capturing trading fees, a significant upgrade to classic LP rewards. Success cases include MakerDAO, Synthetix, Liquity, Qi DAO, and Optimism itself; all of which retain significant liquidity for their tokens on Velodrome.

This design also simplifies the onramp for new projects joining Optimism and can therefore accelerate development on the ecosystem.

Since its June 1 launch, Velodrome has attracted $15.5m+ TVL (>$40m at peak) and positioned itself as a key protocol on the Optimism ecosystem.

Directing OP incentives to core protocol contributors such as active veVELO voters and strategic partners will add foundational strength to Velodrome’s economy in these early days, giving us time to build out additional functionality critical to the protocol’s success.

How will the OP tokens be distributed? How will this distribution incentivize usage and liquidity on Optimism?

Velodrome will allocate OP distribution to support a healthy economic equilibrium of protocol incentives and reward further development on top of its liquidity layer:

Velodrome’s LP emissions are designed to run in perpetuity, following a sustainable and predictable schedule (see our docs for details). As a result, liquidity incentives will always be a key protocol feature.

The incentive program outlined above will significantly boost the value of accumulating VELO and vote-locking into veVELO, supporting the health of the Velodrome economy while the natural tailwinds of Optimism’s growth accelerate. Once OP incentives end, protocols and retail players alike will hold a long-term veVELO position that will allow them to further direct VELO liquidity incentives, while sharing the upside of Velodrome’s and Optimism’s success.

The VelodromeFi incentive model is designed in such a way that each of these actions will be reinforced and complemented with additional VELO incentives. In the case of the locking incentives, veVELO holders will receive a higher rebase (veVELO balance growth) every epoch, proportional to the share of total VELO supply that is locked (veVELO.supply / total.VELO.supply). Likewise, flywheel incentives such as bribes will attract an outsized share of VELO emissions to targeted pools, allowing liquidity providers to capture the increased emissions and creating a virtuous cycle of rewards for each $OP committed as part of this strategy.

The amount requested is way to high for the traction your project has.

Thanks for the proposal guys.

In regards to that particular allocation, when you say “OP paired with key partner tokens” do you mean that a portion of OP from this proposal will be LP’d into popular/partner pools? Or that it will be used for bribing incentives for those pools?

we’re flexible on this. could be done on a case-by-case basis

really this is part of the strength of this particular program and our commitment to being an active partner as a team; can lay out bespoke incentives to get new protocols onboarded to OP

There’s no way you read this in sub 1 minute. It is the 5th biggest protocol currently active on Optimism by TVL.

Exactly right, ser. Use the OP token more as a base pair to help drive more liquidity to partner pairs as well as drive additional utility / liquidity on $OP itself.

We’ve got a bigger idea here we want to pitch soon too.

distributions from the last voting round in fact have us confident that this is an appropriate amount given our top status as an OP dex, and the centrality of our protocol to ecosystem liquidity carries multiplier benefits that wouldn’t be found in other proposals

I see, can you specify how much is planed for pairing OP with the partner tokens and given that there is no single sided liquidity provision, how will the OP be physically paired with those tokens?

Based on metrics and usage the amount asked is way to much, you can very quickly see that. I am not saying NO to the proposal, only saying the amount is way to much based on those 2 parameters.

TVL of $15.9 million, requesting $1.5 million of OP for mainly incentives.

As @jackanorak mentioned, it would probably be on a pretty case-by-case based on the partner protocol’s needs and assets. But, one could easily imagine some form of token swap allowing both sides to provide deep liquidity on an XXX-OP pair.

Fees and or bribes generated from these pairs could then also be compounded into additional liquidity to continue building the size of the pool. I think the overall % of the allocation that would go specifically to this function would probably depend on the amount of demand and it’s relative efficacy in onboarding/deeping liquidity for partners.

Are there any good benchmarks in your mind? Looking at the current state of proposals, it’s hard to get a gauge.

There is also a fair amount of value we’re creating that is difficulty to quantity.

We’re actively working to attract and onboard new protocols to the ecosystem: Ren, Hundred, Redacted, Lido, Volt, Layer2DAO, Angle, etc etc. Part of the reason Optimism helped us to bootstrapped was to help new protocols get liquid (a major pain point in the past). That will yield exponential value for the ecosystem.

We’re also helping to deepen liquidity on critical ecosystem pairs like sUSD and sETH that support folks like Synthetix, Lyra, Aelin, etc. In the past 7 days, we were able to bring 1M in TVL to the sETH-WETH pair. And we’re highly capital efficient in doing so, which should help unlock a ton of growth for those projects.

The big thing though is that we’re Optimism native and the protocol is designed as a public good. 100% of fees and bribes stay in the ecosystem and go back $veVELO lockers which are primarily projects on OP. Compare that something like Curve where 100% of the bribing happens on main-net and 50% of the fees go to veCRV stakers there.

If we can capture more of the TVL and volume there, the ecosystem and Optimism wins.

Got it, so I think the details around those “token swaps” would need to be hashed out at least to some degree in the body of this proposal given how many variables there may be involved. That way delegates can have a pretty clear picture as to how that allocation will be utilized.

i’m not sure we can do that adequately, because we have to be responsive to the needs of the market. i don’t think anyone wants to force distribution for its own sake when it’s not efficient.

but i want to make sure i’m addressing any concerns you might have. could you please lay out what you’re worried might occur?

TVL of $15.9 mill but total volume of $238 million since only the 2nd of June. The OP/USDC pool has the most volume for OP anywhere I’m pretty sure ($3 million average daily volume since inception of the pool).

I have no worries, but I’m certain other delegates would want to know what the plans around that process are. It doesn’t seem like there is a clear plan for how the OP will actually be paired with the partner tokens effectively and that’s what my question is concerned with.

so if we were to earmark some portion of those incentives for 'OP pairing" you’d find your concerns addressed?

i guess what i’d say is that if others have a specific concern about a lack of clarity in our plans beyond what we’ve outlined in the proposals and comments, they should raise them. if you’re satisfied, then as far as i can tell there’s not much cause to impose an arbitrary earmark for its own sake. if everyone wants token pairing (and again, please stay tuned for a broader proposal we think will dramatically help OP), we should devote the entire allocation to it, i.e., commit all of the allocated OP to LPs versus using them as incentive payments

If high-priority, large protocols, say, have POL on another chain and just need convincing to migrate over, we shouldn’t limit ourselves to OP pairing (especially if they’re stablecoin protocols!) as a potential use of granted OP when the broader upside of bringing them over is substantial

this, by the way, owing in part to substantial voting and incentivizing we’ve done (as well as core protocol design), which has led us to leapfrog Uniswap and Curve in efficiency and aggregator routing despite our threadbare budget

now consider the high requirements of many high-throughput OP protocols for deep liquidity and low-slip trading and the incipient need to get that sorted before the next swell of user interest and you start to see just how much this grant could do for the OP eco. we’re well positioned to be the top store of liquidity here, acting primarily as a public good (with no private funding!) for the benefit of Optimism

Yes I would like to see how much is earmarked for token swaps given that you will essentially be selling OP to who ever you plan on partnering with and there are many variables involved in that process.

Personally I think that part of the allocation should be minimal given how opaque and discretionary that process would be, but that’s just my opinion.

taking it from the discord:-

This a huge amount of token just for LP incentives.

is this for development of this feature, right ?

and again, your incentives are not clear.

In this current form, this will be an easy No for me.

Locking incentives are incentives to lock VELO as veVELO and claim Velo voteshare.

Flywheel incentives are in part LP incentives, or they may be distributed in the form of paired OP within an LP, which as far as I can tell hasn’t been an option explored by any other proposal but which we believe carries massive benefits, which we’ll elaborate on in governance this week.

I’ll say this again: if all people are asking for is an up-front demarcation between LP incentives and LP pairing, we can do that if it gets to yes. We just don’t think it makes a whole lot of sense.

All of this will be co-incentivized by us following an ongoing program.

The relay section is to solicit outside help in the development and auditing of this additional feature, which would be a first-of-its-kind addition to a dex.