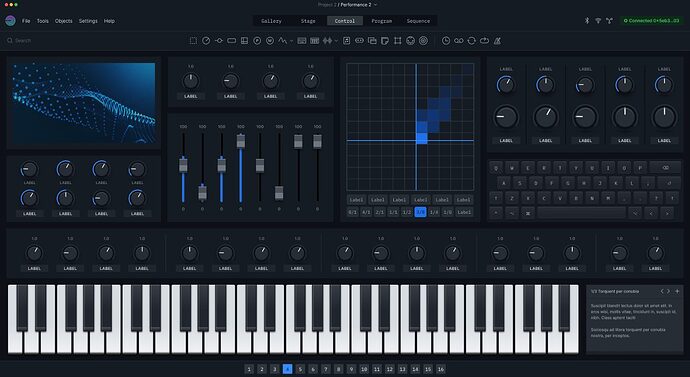 Optophonia is an audiovisual instrument, a creator community and an NFT marketplace for the production, curation and dissemination of visual music.

Optophonia is a real-time motion graphics application based on Unreal Engine, with the beachhead market targeting live visuals for music performances, both IRL and in the metaverse. Its simplified UI gives users instant access to the graphics power of Unreal, without the steep learning curve normally associated with a game engine. The app cuts cross many existing markets of digital creative tool users, including vj artists, motion design artists, visual programmers, musicians, modelers, animators and visual effects artists. Our target is to reach 1m users as a conservative estimate of its potential user base, when considering how many tens of millions of users regularly use apps such as After Effects, Unreal, Max/MSP and Resolume with which Optophonia intersects in its capabilities.

Optophonia utilizes throughout its feature set design patterns that will be very familiar to digital artists of many stripes. By offering NFT integration—NFTs imported In as media assets, and NFTs Out as new minted performances— it creates a bridge between Web2 and Web3 ways of producing digital audiovisual media. Beyond the app itself, the marketplace we are developing around Optophonia disrupts over 20 years of digital asset conventions by adding media rarity and secondary sales to the process of obtaining digital assets for audiovisual compositions.

With a subscription-based software model and an adjoined NFT marketplace, Optophohonia is uniquely positioned to be resistant to downturns in crypto markets, since its user community is organized around a motion graphics digital creativity tool. Being based on a game engine allows us to integrate many kinds of digital assets into motion visual compositions, including: 2D images (textures), 3D models, rigged animatable characters, motion capture files, digital clothing, audio and video files. This makes Optophonia a new ‘Gesamtkunstwerk’ (a ‘total artwork’) format, one that literally invites every kind of digital artist to participate in the kinds of artwork that can be produced with it.

By building on top of Unreal Engine, we’ve eliminated the steep learning curve of a game design environment by presenting only the core functionality needed to produce performance visuals for music. Any artist that has ever used a video editor, music DAW, visual programming tool, 3D modeling app, or hardware controller will find Optophonia to be a highly intuitive digital creativity tool with direct NFT and asset integrations.

We are building a new creator economy where millions of visual artists and musicians can mint and sell media assets on Optimism for use in their musical performances, disrupting a 20-year old industry with royalty splits.

Our vision is to empower visual and musical artists to collaborate with each other and produce new media for NFT marketplaces, live performances and the Metaverse. Creator incentives for digital artists and musicians will remain when listing or selling media assets in our marketplace.

Blockchain-enabled technologies allow for communities of professional artists and their audiences to set up new alternative economies that are not subject to the same economic laws as the winner-take-all internet platforms associated with Web 2.0. The dominant platforms, such as YouTube or Spotify, mostly produce pennies of income for the digital creatives which provide them with content. Our community-driven enterprise has an historically significant yet also ground-breaking concept rooted in the traditions of the fine and performing arts. As such, Optophonia will serve diverse digital creatives across visual and musical media in the era of Web 3.0.

Has your project previously received an OP token grant? If yes, what’s the status of these tokens?

Proposal sidesteps/fails to answer several questions in the grant application. I recommend you rewrite this with more direct responses.