Project Name: Interest Protocol
Author Name & Contact: GFX Labs; governance@gfxlabs.io
L2 Recipient Address: 0xa6e8772af29b29B9202a073f8E36f447689BEef6
I understand that I will be required to provide additional KYC information to the Optimism Foundation to receive this grant : Yes
Number of OP tokens requested: 240,000
Category: DeFi
Is this proposal applicable to a specific committee? Yes. One of the DeFi Committees.

Please link to any previous projects the team has meaningfully contributed to:
To avoid forum clutter, this can be disclosed privately upon request.

Relevant Usage Metrics: On Ethereum, Interest Protocol ranks 118th in TVL after less than 1 month, and $3.9m in overcollateralized loans (both at time of writing).

Competitors, peers, and similar projects:
Compound and Aave are both competitors. Similar projects (overcollateralized while also fractionally reserved) are difficult to locate.

Date of deployment/expected deployment on Optimism: Ultimately up to IP governance, but this grant would likely prioritize that deployment to the immediate future.

Ecosystem Value Proposition: Interest Protocol plans to support the OP token as collateral on Optimism. Interest Protocol is designed to allow tokens held as collateral to still be able to participate in governance via delegation controlled by the user. This means token holders – in particular small holders whose governance voice is not particularly loud – avoid choosing between using their OP to finance on- or off-chain priorities, or participating in Optimism governance.

Has your project previously applied for an OP grant? No. But there is a separate grant request for this project for an incentives subsidy.

Did the project apply for or receive OP tokens through the Foundation Partner Fund? No.

Users will hopefully retain their OP to borrow against, delegate their votes, or both. Note that Interest Protocol will support OP as a collateral, and will also allow users to continue delegating their OP while serving as collateral. The screenshot below shows what this looks like on Ethereum Interest Protocol with other governance tokens. 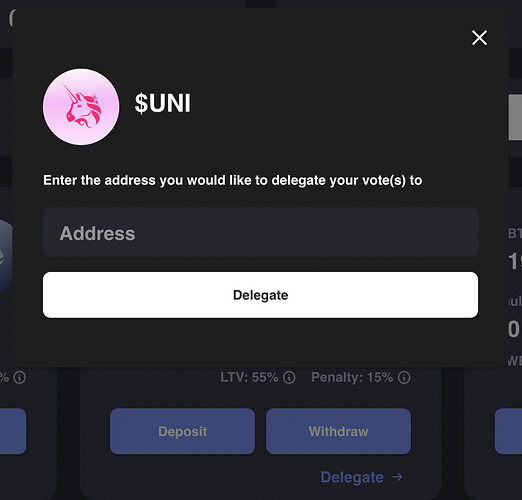 The specific schedule is ultimately up to Interest Protocol governance, but 20,000 OP per week for 12 weeks to celebrate the launch on Optimism is the intention at this time.

IPT, the governance token of Interest Protocol (not yet in circulation as of writing), will be used to incentivize borrowers. IPT will at least match with OP incentives on a 25 cent price basis for IPT.

This falls under Defi committe review I asume. Specify it please.

Can you provide a reference from the Operating Manual? This proposal is obviously something that would fall under a DeFi committee, but if stating that is required formality, we’d like to find the source to ensure we follow those guidelines precisely.

Edit: It was under the grant proposal template for anyone else looking for it. Thanks again!

Date of deployment/expected deployment on Optimism: Ultimately up to IP governance, but this grant would likely prioritize that deployment to the immediate future.

In case the first one is not approved by OP governance, can you specify a little more how this proposal is affected? For example detail some drawbacks, or expected deployment in both scenarios if is possible. Thanks for considering splitting your proposals.

In case the first one is not approved by OP governance, can you specify a little more how this proposal is affected?

Deployment to Optimism would likely not be prioritized to the same extent over other work (such as collateral onboardings) if the smaller proposal is not approved. Interest Protocol has decentralized token governance, so that’s obviously just a guess since any token holder with enough IPT or delegated votes could put forth a proposal to prioritize an Optimism deployment over other work.

These were broken into separate proposals to give governance the option to vote on each piece separately, since one is to defray deployment expenses and is quite small, while this proposal is targeted at more traditional co-incentivization and larger in size.

Hi, this proposal is actually not yet on Snapshot. Hence, you voted for the proposal below

Project Name: Interest Protocol Author Name and Contact: GFX Labs; governance@gfxlabs.io I understand that I will be required to provide additional KYC information to the Optimism Foundation to receive this grant: Yes Number of OP tokens requested: 31,764 OP L2 Recipient Address: 0xa6e8772af29b29B9202a073f8E36f447689BEef6 Grant Category: DeFi Is this proposal applicable to a specific committee? Yes. One of the DeFi Committees. Project Description: Interest Protocol is a fractional reserve…