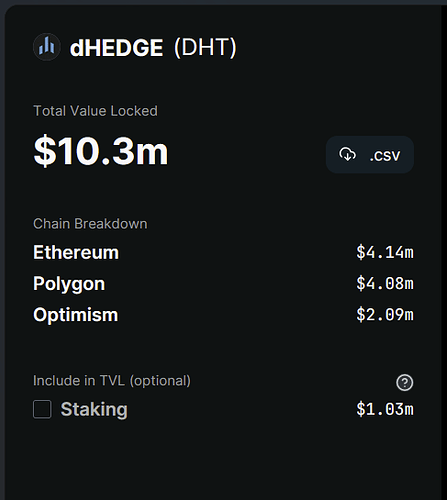 Number of token requested with distribution plan for 1 year is good, I would allocate few percentage for addresses willing to bridge their asset from different chain to OP chain and lock it for long term.

You are matching dollar value of OP token requested which is also a great move.

Appreciate this feedback. Given there’s $1m TVL of DHT currently staked on Mainnet, and the new staking proposal is going to sunset staking on Mainnet - the OP incentives are intended to be a substantial extra incentive for that liquidity to bridge and stake on Optimism.

It’s a very solid proposal.
Agree with @mastermojo that you may think about requesting 500k op tokens over 6 months.

Dhedge is a great product and it’s good to see incentives will be matched 1/1. I support this proposal.

I support this. Will be voting for.

Thanks for the proposal!
I have been using dHedge for a while. it’s a great product. Can you articulate the following:
“users will be required to pair their staked DHT with staked dHEDGE Pool Tokens to receive incentives.” - what does this mean? what pairs are eligible? can you gives an example?

Thanks @Ruby - based on your feedback will add the below to the Proposal:

"The proposed new staking mechanism requires users to stake $DHT paired with an allocation of specific dHEDGE Pool tokens (DHPT). This is designed to ensure staking rewards are going to users who are involved in the value creation on the protocol, versus solely locking protocol token liquidity. Not all dHEDGE pools will be able to be staked initially, dHEDGE will operate a whitelisting process to ensure the stakeable pools are of sufficient performance and TVL.

dHEDGE has yet to confirm which DHT:DHPT pairs will be stakeable, but will include the Toros automated strategies e.g. Stablecoin Yield, and a new market neutral strategy launching the week of 25th July.

As an example, a user could stake 200 DHT with $1000 of the Stablecoin YIeld pool. As the time staked increases, combined with performance increases in Stablecoin Yield, the users potential staking rewards will increase. Variables influencing the total rewards eligible include i) time staked, ii) performance of staked pool token, and iii) the dollar ratio of staked $DHT to $DHPT. Please see the attached Proposal (above) for more detailed information.

Rewards are paid out at the time of unstaking, which is where dHEDGE intends to allocate an equivalent amount of OP to the $DHT being emitted."

thank you so much for the detail!
this looks great!
I voted yes for dHedge, LFG!

Voted yes - I like the 1:1 matching and overall Optimism alignment. Thank you for a well thought out proposal!

I have a number of concerns with this proposal.

1.) The # of tokens requested for the TVL/Usage seems huge, why not use request a smaller amount to start? For context, that’s almost $1,000 per unique address that has interacted on optimism. Protocols of a similar size have been requesting in the 100k-250k OP token rage, which I think is more appropriate.

*** the biggest concern ***
2.) In order to be eligible for token distribution, users are required to buy the dHEDGE token. While working on a new staking system might be something that makes sense internally, this feels a lot like have optimism subsidize the price of the token. I don’t see how helping dHEDGE “create closer alignment between protocol revenue and staking rewards” is helping drive usage or liquidity to optimism.

3.) There is an undefined whitelist for the pools where these token distributions will go. What’s stopping dHEDGE from allocating all of the tokens to their own pools?

To me this proposal doesn’t seem to have aligned incentives with OP at all, and I will be voting no.

I recommend others do this same and I’m happy to clarify my logic on why this seems like a direct subsidy of the dHEDGE token price.

While I appreciate dHedge’s contributions to Optimism, this proposal is more designed to incentivize passive (correction: not passive, but staking nevertheless) staking of DHT tokens rather than active usage on Optimism, that too for a very substantial amount that’s >12% of DHT’s market cap. I’ll be voting Against, but I hope to see a future proposal which incentivizes managers and investors instead.

@polynya While I appreciate dHedge’s contributions to Optimism, this proposal is more designed to incentivize passive staking of DHT tokens rather than active usage on Optimism

This statement is actually untrue, as staking isn’t passive. New staking is directly tied to using the dHEDGE protocol. To participate in staking, you must have added to TVL in proportion to what you are staking. The extent to what you receive in rewards is determined by the performance of the TVL you added. You can read more about the model here: DFP-33: New DHT Staking Model 2.0 - dHEDGE Feature Proposals (DFPs) - dHEDGE DAO.

This proposal directly contributes to growing TVL and user-base on Optimism.

I hope to see a future proposal which incentivizes managers and investors instead.

TLDR; to stake you are now required to be an investor and stake a proportional amount of investment in a managed pool, more investments from investors benefit managers.

Looking to address a couple of misinterpretations of our proposal. Points addressed in order below from @Michael’s post

The amount of OP requested is based on our current staking and DHT performance mining emissions rate.

At current prices this equates to around $250,000 over six months. During the analysis and drafting of our proposal, $OP was around $0.50 and we sized the OP request accordingly.

The total ask is also conservative based on the rate of granted OP per Optimism TVL from other similar passed proposal requests:

The new staking mechanism is fundamentally designed to increase protocol utilisation and engagement as well as support governance of the protocol. Staking rewards are not set-and-forget: they are only redeemable on unstaking which requires an investor to monitor pool performance to assess an optimal time to claim rewards. (Once claimed, an investor then needs to restake with reset staking reward parameters and the process restarts).

dHEDGE is about to drive a migration of staked liquidity onto L2. Fundamental to the new staking mechanism is sunsetting staking on mainnet and enabling staking on L2 for the first time. Given dHEDGE is on Optimism and Polygon, current DHT stakers have a choice on which L2 to continue staking on.

There’s currently $1m DHT staked on mainnet, and migrating dHEDGE governance to Optimism is part of the motivation for this grant application.

The requirement for a pool to be whitelisted for staking rewards is to ensure rewards can’t be gamed through subversive pool management. The whitelist of pools is to offer quality investment vehicles that maximise a stakers opportunity to receive rewards.

The composition of the initial whitelist will be decided by governance vote.

Thanks for the clarification. If the protocol allows investors to use it without being required to stake your token, and for OP to be distributed for said activity, I’d be happy to support it. However, I’m not going to vote for a proposal where >12% of the market cap is distributed in $OP for staking said tokens.

At current prices this equates to around $250,000 over six months. During the analysis and drafting of our proposal, $OP was around $0.50 and we sized the OP request accordingly.

You have to understand these are very volatile markets, and request a reasonable amount accordingly. Currently, 500,000 OP is worth $475,000. Given DHT’s market cap, no more than 50,000 OP is acceptable IMO (given the requirement for staking DHT).

To further clarify on this point:

Staking rewards (including OP rewards) would only be paid out to stakers who have paired a positively performing pool token. The staking mechanism does not incentivise the act of staking DHT alone. If a staker pairs DHT with a pool that performs negatively, no staking rewards are earned.

The new mechanism is aimed at incentivising active liquidity.