in proposal you have mentioned “The distribution of incentives is to take place over the next 18-24 months and will be regulated based on TVL flow and competing interest rates.”

which one is true ?

and where do we stand on this

We’re doing production testing and will be moving to closed beta within the next 2 weeks.

I am OK with these changes. Glad to see protocols from other L1s migrate to Optimism.

After discussing our proposal with other delegates, it was decided our timescales are too long, and that we should adjust our ask accordingly. Not sure what you mean by “which one is true.”

We’ve been live with Reliquary for about a week now poking and prodding at it internally, and everything is running smoothly. Most of the testing is on the front end since it’s heavily gamified to ensure graphics and state changes are all working properly.

Since our multi-strategies are up and running as well (see below) there’s not much to inhibit us from deploying Reliquary relatively soon. Granary’s multi-incentive controller is also on chain currently and we can flip that on when needed.

Proposal Status moved to READY. Thank you for the feedback / support!

I should have chimed in here earlier so it was clearer that this proposal does indeed have buy in from a delegate. Unfortunately it was marked “not approved” on snapshot but this was my fault. I’ve been working with the Byte Masons on this and gave them a few rounds of feedback before they ultimately landed at what I think is a solid proposal (and I fully support it).

Balancer & BeethovenX plan to work closely with the Byte Masons to roll out Granary & Reaper boosted pools (liquidity pools where most of the tokens are deposited elsewhere to earn a yield, in addition to swap fees). Aave can be a bit slow to add new tokens - meanwhile Granary already supports OP and they can move quickly to add other tokens like MAI that we can then leverage on the LP side. Reaper also recently rolled out multi-strategy single asset crypts which can be used in a similar way.

The expertise the Byte Masons bring to the table cannot be overstated. The brain power Optimism stands to gain here is massive and when you combine that with Balancer’s technology it’s going to unlock a ton of cool integrations.

I would like to see a lot more details regarding the distribution of OP before voting. How will it be distributed?

Additionally, I disagree with the recent edit of shortening the time frame of distribution as the goal is promote Optimism, not distribute OP to mercenary farmers in a short time frame. I would suggest keeping the distribution period to the original proposal of 18 months.

Finally, the Byte Masons have a phenomenal track record of strong security. However, with the recent departure of Andre Cronje and Andre directly attributed one of the reasons was due to Reaper’s greedy actions in abusing Solidly. What would prevent another similar situation?

Voted yes - I like the 1:1 matching, the Optimism alignment and the requested amount is reasonable. Thank you for a well thought out proposal!

I’ll be abstaining from this proposal. It certainly seems like a strong one, but having looked at it over the last couple of days I don’t have the bandwidth to dive deep into your suite to assess exactly how it’ll drive usage on Optimism. As a small cap, I’m also concerned by your ability to match incentives that are a significant fraction of your market cap over a relatively long term in a very volatile market, that too partially with a token which does not yet exist. I wish you the best of luck, and hope it works out, but I neither have the confidence right now to vote For; but at the same time I definitely don’t think this proposal has anything problematic to warrant an Against.

Fan of your work, a very measured response as I’d expect.

Our firm has been around for over a year and we have millions of dollars in market liquidity even at these low valuations, along with plenty of cash & assets to cover the incentives promised in the proposal many times over. We have a team of 35 with 20 supremely talented engineers & a couple years of runway.

We waited until after the bull market to launch our token unfortunately but our fundamentals are very strong. Reached 300m TVL with no VCs or token in 2021 which I believe is some kind of record. Fair launched with some cool sybil-resistant tech you can read here. We have the UX still up for posterity’s sake over on https://oath.sale.

Long story short, we’ve been around the block and can back up this proposal 1000%. We’re very mature as a company (by crypto standards) and quite large.

Hey @Crypto_A_S thank you for the proposal.

I have the same question as @rasmuky. I tried to dive a bit deeper into what you guys do and can’t find good statistics that would help me see the adoption of your protocol and what is live in optimism yet and what not.

Good to see you adjusted the proposal amount down.

But why did you reduce the token distribution from 18 to 9 months? I liked the long term distibution idea more.

I agree, we will work on a dashboard to show TVL across products more clearly, I really liked @rasmuky’s idea.

Here is a quick rundown of the status of the Product Suite:

The Byte Mason team decided to reduce the token emission timeline due to feedback we received stating that emitting over 18 months was too long and that other delegates would rather see us reduce our $OP ask + emit over a shorter timeframe + potentially come back with a second proposal once we can show product adoption by Optimism users.

I hope that answers your questions. The team is very excited to continue to build and grow on Optimism! Looking forward to seeing where we will be in the next 9 months

Hey @Crypto_A_S thank you for taking the time to answer my questions and generally for all the work you guys put in the proposal.

I spent some time doing due dilligence on your project and its history in Fantom.

What I came up with shocked me. I have a few builder friends whom I trust a lot and who used to be in the Fantom ecosystem and what they told me aligns very much with the comment by @FantomFunhouse above which is for some reason hidden? Why hide a contrarian view?
Link here: [READY] [GF: Phase 1 Proposal] Byte Mason Product Suite - #33 by FantomFunhouse

Posting a screenshot also to make it easier to see what I reference: 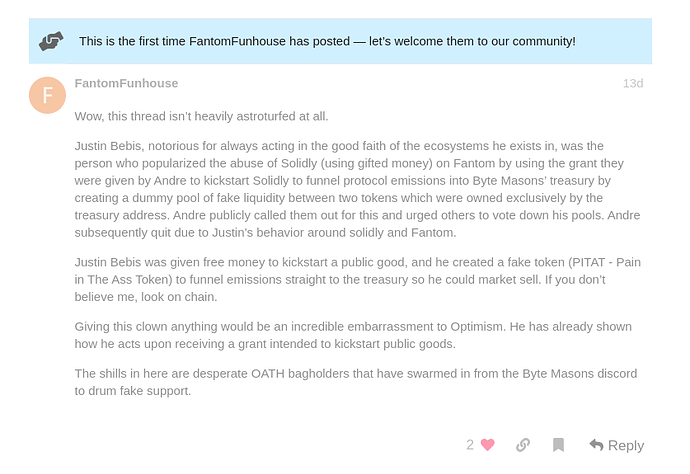 My friends basically told me that the way your team behaved in fantom was that of a value extractor who tried to exploit everything for financial gain. could not be trusted and in the end contributed to the fall of that ecosystem.

I don’t want the same to happen to Optimism and I don’t condone this kind of behaviour so I will be voting against.

I know only one person who was involved in the Fantom ecosystem but he made similar points about JB (which is one reason why I voted no to this proposal), however he wasn’t sure about the specifics and in particular hadn’t heard of PITAT. I’ve tried to fact check myself by basically only have familiarity with the Ethereum ecosystem so don’t really know which sources are more or less reliable. Please could you share which of the claims you’ve linked to you’ve been able to confirm?

Thanks for doing the deep dive though, with lots of delegates voting ‘for’ the proposal I was starting to have second thoughts about taking guidance from my friend on this one! Any more info you can share would be really valuable.

Hi @lefterisjp just echoing @MinimalGravitas comment, I have voted in favor but if you could provide some info/link on what you have able to confirm would help us all.

What @FantomFunhouse posted is what I also got told by my friend. Unfortunately that friend strongly asked to remain anonymous as they have left crypto for good. Said most of the stuff that happened is in chat groups and on-chain … but yeah I also have not dealt with the fantom ecosystem to be able to dig them up myself. But I greatly trust that friend so I simply can’t vote yes here.

Bebis explains exactly what he did with Solidly in this podcast.
Hear his own words and judge for yourself what you think of it:

The proposal looks well-prepared and interesting at first sight.

As we have not heard of Byte Masons or any of your products yet (hardly used Fantom), we did a brief check with conflicting results. It seems you’re tapping into various ecosystems at the same time right now? Projects are not yet / just launched? (-> would justify smaller Ask; or more info on co-incentives?)

Would love to see additional info on the Fantom story too as we’d like to welcome genuine, long-minded ecosystem partners to grow the Op ecosystem together.

Looking forward to hearing back soon and clarification to make a fair assessment!