Relevant Usage Metrics: On Ethereum, Interest Protocol ranks 118th in TVL after less than 1 month, and $3.9m in overcollateralized loans (both at time of writing).

Optimism alignment (up to 200 word explanation): Interest Protocol plans to support the OP token as collateral on Optimism. Interest Protocol is designed to allow tokens held as collateral to still be able to participate in governance via delegation controlled by the user. This means token holders – in particular small holders whose governance voice is not particularly loud – avoid choosing between using their OP to finance on- or off-chain priorities, or participating in Optimism governance.

How will the OP tokens be distributed?
The tokens will be used to partially fund deployment and development costs for an Optimism instance of Interest Protocol.

How will this distribution incentivize usage and liquidity on Optimism?
Interest Protocol would accept OP as a collateral at deployment, and preserve the ability of OP holders to delegate their voting rights. This serves the dual purpose of providing a demand sink for OP that would otherwise be sold, and allow OP holders a venue where they can avoid choosing between liquidity and governance participation. Normally there is an implicit “tax” to pay by retaining governance tokens for voting or delegation, since the opportunity to use it as collateral must be given up. Interest Protocol is designed to avoid this choice. On its Ethereum deployment, for instance, UNI tokens used as collateral can still delegate voting power to be used in Uniswap’s governance. 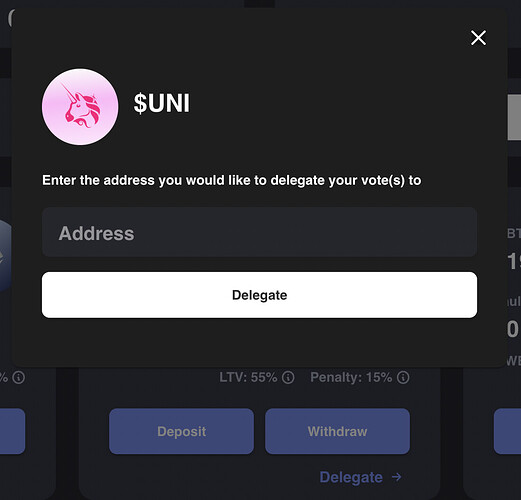 We believe this results in a healthier governance ecosystem where small holders in particular continue to participate, since they do not have to choose between financial and governance utility of their tokens.

Why will the incentivized users and liquidity remain after incentives dry up?
This request is to fund deployment and development of a protocol that will provide utility to OP holders and the Optimism ecosystem.

Over what period of time will the tokens be distributed?
The tokens for would be sold as expenses accrue, since the grant is to fund development and deployment.

Has your project received an Optimism grant before?
No.

How much will your project match in co-incentives?
GFX Labs and/or Interest Protocol governance will cover the remainder of expenses related to Optimism deployment and all ongoing maintenance.

This request is for an Optimism grant to cover 50% of estimated costs.

Currently in Optimisim there are several lending protocols implemented, subsidizing their implementation in Optimism I don’t see that it really adds value to the chain

Thanks for taking a look!

this is both proposals of yours, I would recommend submitting the proposal once they are live on OP chain.

If Interest Protocol is unique in preserving the OP lender’s voting rights, then I’d say this lends considerable value to Optimism that isn’t being properly appreciated.

Think this deserves some attention as a straightforward layer value play.

Like with other DeFi protocols it would perhaps make sense to make the proposal after you have deployed in optimism and do the usual OP incentivization request along with matching co-incentives from your side.

That said, I think the request is quite small and minimal and I personally don’t shy away from giving funding for development. I also like that you would like to accept OP as collaterall and even retain voting rights at deposit.