i think it,s has a future

Please don’t give the perp team, anything.
They closed v1 half a month ago, but the funds in the pool are not enough for everyone to leave fairly. They were very insincere in the process of reprocessing. Victims include users of Alameda Research, wintermute, and many others.
You can imagine a DEX that closes instantly and gets back the money, which is less than the deposit originally put in. Under the condition of making money, we only receive 1/10 of the money that we should have taken. They’re trying to get this thing down. Judging from the information when the exchange was closed, all the deposits were about 30 million yuan, but the team was only willing to give you about 5.5 million yuan. They rugged everyone’s money.
yenwen our victims have united and will get our money back through all means.

This post was flagged by the community and is temporarily hidden.

The project team played very cleverly, a large number of OPs were allocated to very few addresses, and most of the addresses that participated in providing LP only got 0.1 or 0.2 OPs. A total of 689 addresses were eligible for the airdrop, of which 90% received 10% of the airdrop, and 90% of the airdrop went to a very small number of addresses (presumably all directly or indirectly related to the project). Did the OP team also acquiesce to this behavior? Exposure not allowed? This article keeps getting hidden.

The project party’s approach is really funny. The announcement said that if you have provided liquidity for pear before June 1, you will have a big surprise, and it is a big surprise, you will receive 0.2 OP, worth $0.1. Only 689 addresses in total meet the airdrop criteria, don’t tell you that this allocation is to prevent sybil attacks! funny!

Wow, some did try to warn about giving $OP to Perp, but no one listened. 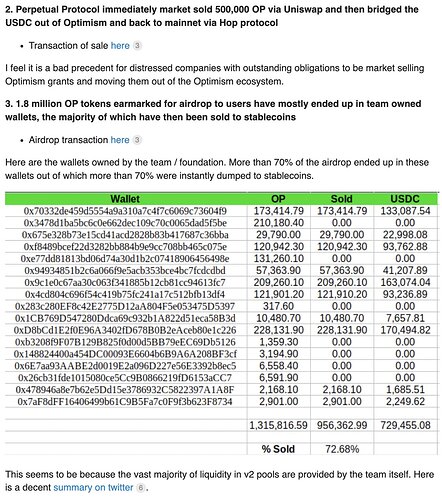 I’d really like to hear why Optimism thought it appropriate to give this protocol nine million OP tokens.

Ignoring what has happened since they were awarded the grant, this proposal is incredibly sparse in the details. I would have expected a proposal asking for what is now over $10 million USD to have a better modeled and more rigorous distribution plan. I would have expected the people who voted for this proposal to have at least asked some follow up questions, but there were none in this entire thread.

There seems to be a complete lack of due diligence here - it doesn’t look like any of the red flags that were raised in this thread were investigated?

Two weeks later the value of Perpetual Protocol’s OP grant is just under $14 million. The liquidity incentives have failed to attract liquidity, the TVL has actually decreased in this time: [perptvl] The airdrop is actually worth two thirds of the total value of Perp’s TVL. You may just as well have bought Perp as a going concern, I doubt you would have even paid anywhere near this figure. There are platforms that did not receive a single OP which have flipped Perp in TVL - PoolTogether for …

Sounds pretty on point to me.